Vocal Jazz CD of the Month - "Jua: Colors of Life" 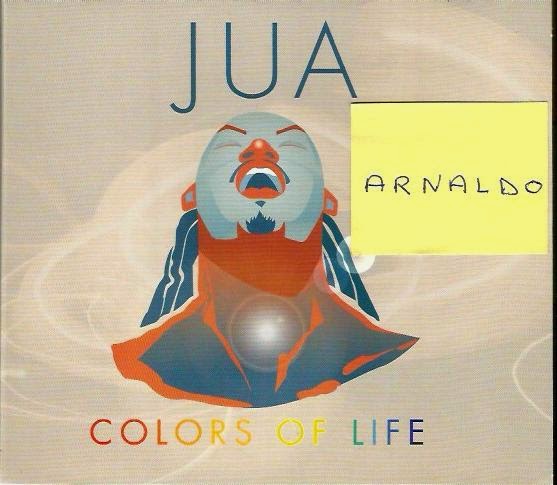 It's not smooth jazz. It's not another artist trying to become "the male version of Diana Krall" (nothing against Diana, btw, but it's time to jazz vocalists to move on and look for other references.) From the opener, Sam Rivers' "Beatrice," it's clear that Jua is a classy singer gifted with a strong persona, warm & silky voice, deep & pure tone, and creative phrasing.

You can hear traces of Mark Murphy's influences, but Jua is his own man, with a sound that has the dimensions of jazz, blues and soul. He knows how to work all the subtleties and nuances, and it's evident everywhere; in the vocal/acoustic guitar duo on Bob Dorough's "Love Came On Stealthy Fingers" (the best version I've heard since Carmen McRae's one) or in the tracks with larger instrumentation.

I can assure you've never heard a rendition of "Old Devil Moon" like this on "Colors of Life." Neither Bill Wither's "Let Me Be The One," alternating samba and straigh-ahead jazz grooves, has never ever been in a better voice before. Onaje Allan Gumbs' production is impeccable, and it gives me goose bumps when he plays Fender Rhodes on "You Are My Alter Ego," spiced by the congadrums of Gary Fritz. Pristine sound quality and great digipak cover art too. So far the best vocal jazz CD release of this year.
********
Colors of Life, the second CD by Raleigh, North Carolina-based vocalist Jua, marks an artistic rebirth for the 35-year-old singer. His 2007 debut, Anticipation, had enjoyed attention from smooth-jazz and R&B stations, but Jua was having second thoughts about his direction and soon found his way to Berkeley's Jazzschool Institute. There he devoted a year to intensive jazz studies and was the first recipient of the school's annual Mark Murphy Vocal Jazz Scholarship. His musical goals came into sharp focus.


Jua now emerges as a unique and highly emotive jazz vocal stylist with the remarkable 10-song CD Colors of Life, which will be released by his Chocolate Chi Music on June 24. Produced by Onaje Allan Gumbs, the veteran New York pianist, arranger, and producer noted for his work with Norman Connors, Nat Adderley, Woody Shaw, and many others, the album showcases Jua in the company of Gumbs on piano and (on one track) Hammond B-3 organ, guitarist Shan Kenner, bassist Gregory M. Jones, drummer Vince Ector, percussionist Gary Fritz, and tenor and soprano saxophonist Roger Byam.

The disc features four original compositions by Jua (three written in collaboration with his former Jazzschool instructor, pianist Matt Clark, the other with Kenner), along with the standard "Old Devil Moon" and tunes by Abbey Lincoln ("Bird Alone"), Bob Dorough ("Love Came on Stealthy Fingers"), Bill Withers ("Let Me Be the One"), and James Williams ("You're My Alter Ego"). Jua also added lyrics to Sam Rivers's 1964 ballad "Beatrice," which opens the album. Arrangements were handled by Gumbs, Kenner, and Clark.

"Colors of Life is an honest expression of my life and the world around me," says Jua. "The process of planning and recording this project with world-class-talent musicians taught me a great deal about my developing voice as an artist. I am eager for listeners to learn more about me through this music."
While growing up in Chicago, Jua Howard was involved in the gamut of athletic activities, but veered toward music after moving with his mother to Lanett, Alabama. He began playing trumpet in the fifth grade, joined the youth choir (and was frequently called upon to solo) at a local Baptist church, and was selected for the Alabama All-State Boys Choir, an ensemble of some 70 voices that focused on European classical music. He and his mother spent two years as members of the All-Atlanta Choir, and Jua then enrolled at Emory University in Atlanta, where he sang in the gospel choir and graduated with a B.A. in English.

He put his singing on hold for two years after graduation, but back in Chicago vocal coach Sondra Davis encouraged him to resume applying his richly rounded multi-octave pipes to song. He relocated to Washington, DC. and worked for a time as a background vocalist with the Blackbyrds. "Jazz was clearly a big part of their foundation," says Jua, "and singing with them made me think about pursuing jazz as a career."

As did Nancy Wilson, whom he saw perform in Atlanta. "She had such presence," he recalls. "It just kinda made me change my way of thinking."

"Jazz," he adds, "which is based on improvisation, is about being a part of an ensemble and everyone communicating with each other to get the musical statement across. Even though I'm standing in front, I'm just one of the instruments telling a story to the audience. It's about the story and the music, and paying respect and credence to the music."

Jua, who uses only his first name professionally (it's Swahili for "sun"), cites Vandross, Hathaway, Al Jarreau, Johnny Mathis, Mark Murphy, and gospel great Daryl Coley as influences on his style. Yet, as evidenced throughout Colors of Life, Jua has developed a distinctive, emotion-gripping approach to song that's quite wonderfully his own.

In addition to taking his new music to several North Carolina venues in the past months, Jua has booked an appearance at New York's Cornelia Street Café. "I am wholeheartedly excited about my upcoming gigs to support the release of Colors of Life," says Jua. "It's always a lot of fun to tell my story and connect with the audience."