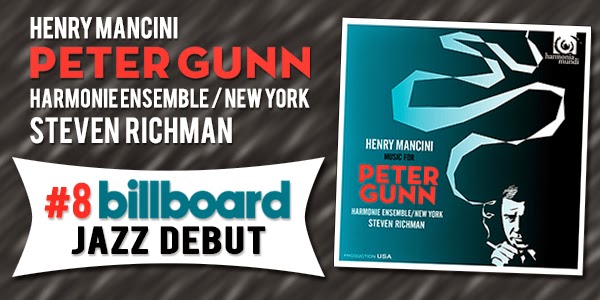 In 1958, the legendary composer/arranger Henry Mancini electrified the world of television music with his dynamic soundtrack for the detective series "Peter Gunn." Not only did he introduce a compelling jazz element into the genre, but he also created a context for the symbiotic relationship between narrative action and its aural environment. The Emmy-winning score - and its double Grammy-awarded album - was performed by an all-star ensemble of some of the West Coast jazz scene’s finest musicians. Now, for the first time in more than half a century, the Harmonie Ensemble/New York under the direction of Grammy-nominated conductor Steven Richman takes a new look at this iconic music in the new harmonia mundi release "Music for Peter Gunn." 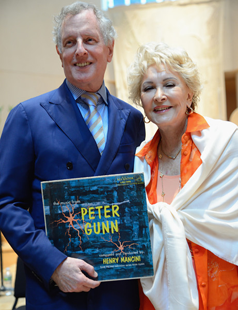 (Ginny Mancini, wife of the composer, and Steven Richman)
Photo by Joe Josephs

One of the most profound elements of the jazz tradition is that the musicians’ pursuit of personal and singular sounds allows each fresh interpretation of classic works to have a new life of its own. The great orchestral composers like Ellington, Strayhorn, Charles Mingus and George Russell were able to perform the same arrangements of their musical creations over and over, creating entirely new versions freshly sculpted by the personae of the musicians who played it. This recording provides that same substance to these timeless original Henry Mancini compositions and arrangements, proving this music to be as vital and vibrant as it was more than 50 years ago.

This is the twelfth album by Mr. Richman and the Harmonie Ensemble/New York, and his third for harmonia mundi, following up on 2010’s "Gershwin by Grofé" and last year’s "Nutcracker Suites Tchaikovsky / Duke Ellington & Billy Strayhorn." As with those two outstanding and highly acclaimed albums, Mr. Richman has assembled the ideal cast of musicians to interpret this music, blending their superb command of ensemble playing with brilliant soloing skills. His deep appreciation of the music and commitment to the highest artistic ideals created the fertile environment that makes this recording so successful. A French horn player before he devoted himself fully to conducting, Mr. Richman had the opportunity to play with Henry Mancini many times. For him, this was truly a labor of love.

“I grew up watching and listening to that great TV show. Everyone knows the Peter Gunn theme but far fewer seem to know there is about an hour and a half of gorgeous music recycled in various forms throughout the show’s three seasons. Even our musicians were in the dark about this. They were happily surprised at the wonderful music, so skillfully written and arranged. We were all thrilled to play it.”

A key figure is pianist Lincoln Mayorga, who was featured on the Gershwin by Grofé album and had played for Mancini on some of the great composer’s road trips.  The remarkable tenor saxophonist and flautist Lew Tabackin – whose presence was so vital to the Nutcracker recording – anchors the highly impressive reed section along with my dear friend Ronnie Cuber, Mark Gross, Lawrence Feldman and Lino Gomez.  The eminent Lew Soloff heads a trumpet section of Stanton Davis, Dominic Derasse and Joe Giorgianni; with a trombone foursome of Larry Farrell, John Fedchock, Mark Patterson and Frank Cohen.  The French horns, so essential to the sumptuous and mellifluous textures that are so intrinsic to Mancini’s sound are played by RJ Kelley, Alexandra Cook, Eric Davis and David Peel.

Much of the action in Peter Gunn took place in Mother’s, the waterfront roadhouse that was both Gunn’s hangout and meeting place.  The five-piece group that played there set the tone for a good deal of the show’s music and therefore those musicians are of paramount importance to this music. Joining Mayorga in the stellar rhythm section are Bob Mann on guitar (whom I admire since Astrud Gilberto's famous "Gilberto with Turrentine" album for CTI), Christos Rafalides on vibes, and the bass/drums tandem of Francois Moutin and Victor Lewis.

Under Mr. Richman’s brilliant direction, this exceptional group of musicians brings the perfect combination of flawlessly tight ensemble playing with the easygoing looseness and vivid spontaneity that makes each solo shine brightly – and always in the proper context, with no grandstanding or virtuosity for its own sake. Although the music remains totally faithful to the original arrangements, the vibrancy and immediacy of today is fully evident.

Bob Mann’s guitar solos have a slightly rock-ish element and the horn solos have a somewhat edgier quality. The delivery of the written lines add a bit more soulfulness to the soulful; bluesiness to the blue; and even a touch more savagery to the drive.  The two versions of the immortal theme (my favorite versions, besides Mancini's original take, have been the ones by Quincy Jones and Eumir Deodato) that bookend the 16 tracks are absolutely explosive – with the reprise opening up the thematic structure and providing an opportunity for the soloists to really strut their stuff.

This recording features all but one track from the first Mancini Peter Gunn album, along with four tracks from the second. One of these is "My Manne Shelly," a dedication to the longtime Mancini collaborator and icon of West Coast jazz, Shelly Manne (this tune was included on the debut album of Eumir Deodato's legendary '60s band Os Catedráticos, "Impulso!" recently reissued on CD under the production of Jazz Station Blog's boss Arnaldo DeSouteiro. Here Victor Lewis pays his own homage to Shelly in the delightful call and response motif of the piece, also highlighted by a burly baritone solo by Cuber.

That small group roadhouse feel is offered in sublime fashion with "The Floater," "A Profound Gass" and "Brief and Breezy" – all evoking the fluid George Shearing sound and featuring jaunty guitar and vibes solos. An easy-swinging, hip groove – as suave and sophisticated as the title character – is front and center with "Sorta Blue" and "The Brothers Go to Mother’s."

Three ballads offer a romantic setting with the appropriately named "Dreamsville" (Quincy Jones did my favorite version ever!) fueled by guitar and alto; "Soft Sounds," built on a slow walking bass; and "Blues for Mother’s," marked by a deeply soulful alto sax. A raunchier blues groove of the growling sort is the vibe for the slow-boogie of "Spook" and the drawling brass-fueled "Slow and Easy," featuring a gutty trombone solo out of the Lawrence Brown school; while "Session at Pete’s Pad" pushes the pedal a bit harder into a smooth stomp.

Designed for the hard-boiled action and chase scenes, there are two virile and impassioned pieces. "Blue Steel" is a dramatic item filled with hollerin’ brass, call and response incantations and a vehement Tabackin solo. "Fallout," opening with briskly walking bass leading into searing flutes, slow boils into a frenzy of growling trombones, wailing French horns and screaming trumpets.

While this is landmark music that broke ground for many fine scores to follow, one thing stands high above it all. This is spectacular music played by an extraordinary group of musicians – timeless, powerful and moving.

For more information on harmonia mundi, please visit: www.harmoniamundi.com
For information on Mr. Richman and all his fine HE/NY recordings, visit: http://www.harmonieensembleny.com
Posted by Arnaldo DeSouteiro at 11:12 PM