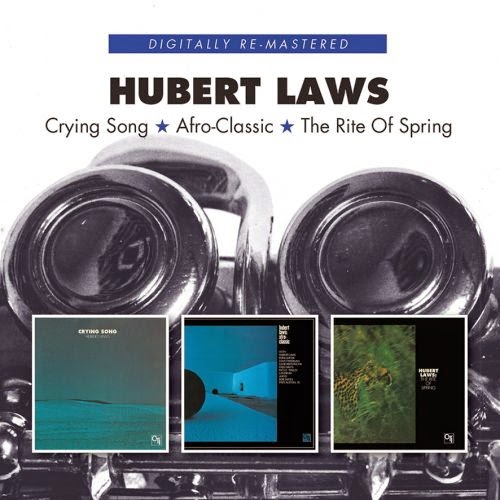 Hubert Laws on CTI Records – a mighty great thing, as you'll hear on these three vintage albums for the label! Laws' first three albums under the visionary production of Creed Taylor, and already featuring that all-star format of sidemen that became one essential point for the CTI success.

"Crying Song," though, is a controversial pop-jazz record, recorded mostly in Memphis with members of Elvis Presley's backing band. Actually, it was supposed to be a Stanley Turrentine session. But he couldn't make it at the last moment, due to contractual problems with his previous label, and Creed invited Laws, who was free from his contract with Atlantic. Anyway, the record sounded very different than Laws' 60s Latin sides for Atlantic, and handled in a pop mode that has his flute drifting over a mixture of organ, piano, electric guitars and rhythms augmented with strings – sometimes easy and jazzy in the same moment. Sometimes only easy listening, like happens on "La Jean," "Love Is Blue/Sing A Rainbow" and The Beatles' "Let It Be."

Other titles include "Listen To The Band", "Cymbaline", "Feelin' Alright" (written by Dave Mason of the English rock band Traffic from their 1968 album, "Traffic" and also covered by Joe Cocker), and The Bee Gees' "I've Gotta Get A Message To You." Three tracks were recorded in NY with different personnel: the title tune "Crying Song" (a psychedelic remake of Roger Water's ballad composed for the third album by the British progressive rock supergroup Pink Floyd), "Cymbaline" (another track from that same Pink Floyd album, "Soundtrack from the Film More," released in 1969), and Laws' own "How Long Will It Be," the only jazz tune on the album, featuring Ron Carter, Grady Tate and George Benson.

"Rite Of Spring," is another story. For many of his fans, Law's masterpiece. It's a groundbreaking record, a mixture of classical themes and jazz, handled with an airy CTI approach – and set to arrangements by Don Sebesky that are simply mindblowing! The album's a wonderful example of the way that CTI really pushed the boundaries of instrumental expression in the 70s – taking Laws wonderfully breathy work on flute, and mixing it with some well-crafted backings that also feature Bob James (Fender Rhodes), Ron Carter (acoustic bass), Jack DeJohnette (drums) and Airto Moreira (percussion) and the secret weapon of the session, Gene Bertoncini on the acoustic guitar.

This larger group is handled by Sebesky, who really brings some magic to the record – a sense of sound, space, and timing that's still a heck of a lot more mature and sophisticated than most instrumental recordings coming out today! Titles include Faure's "Pavane," an a cappella rendition of Debussy's "Syrinx" that sounds sublime, a bop-classical adaptation of Stravinsky's "The Rite Of Spring" built upon Jack DeJohnette's thunderous drums, and the album tour-de-force, the jazzy baroque version of Bach's "Brandenburg Concerto No 3." Jazz flute and CTI were never the same after this album!

"Afro-Classic" is another amazing album, following the same concept of "The Rite of Spring," with the same arranger (Sebesky), most of the same musicians (except for Freddie Waits, then a member of Hubert Laws' touring band, replacing DeJohnnette on drums) – and the cornerstone of the CTI sound! The record's an incredibly baroque set of tracks featuring arrangements by Don Sebesky that mix complicated lines on flute with electric piano from Bob James, into a swirling mass of sound that's warm, soulful, and fuzzy. The record's incredibly hip, even on material like Francis Lai's mellow pop ballad "Theme From Love Story", then a monster hit on the Billboard charts.

On James Taylor's "Fire & Rain," that features an hipnotic bass groove, and Bach's "Passacaglia In C Minor", Laws and the group soar away into another plane of being!
Posted by Arnaldo DeSouteiro at 7:46 AM