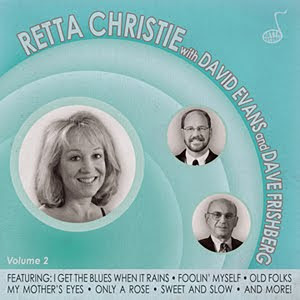 Pure delight of music nostalgia! Highlights: "Foolin' Myself," "'Neath the Purple on the Hills," "You Always Hurt the One You Love," "For All We Know" and "The Lonesome Road."

Retta Christie makes American music to be enjoyed. If the Portland vocalist has a heartfelt reaction to a song, she sings it her own way, regardless of the style or tradition whence it came. She draws from Western swing, jazz, country and western, and the Great American Songbook and makes all of it her own. In a so pretty way, I must add.

Christie's surprising song choices, her breezy sense of swing, and her gift for conveying the emotional essence of a lyric are in ample display on her new CD, "Retta Christie with David Evans and Dave Frishberg, vol. 2."

Both volumes of the Dave and David collaboration (the first was in 2008) celebrate Christie's personal and creative relationship with cornetist/pianist Jim Goodwin, who died in 2009. Christie and Goodwin met in his hometown of Portland, and as they started sharing their musical passions, they discovered considerable common ground despite the prejudice that often casts country music and jazz as antithetical.

"I was immersed in older country and western, and Jim was obsessed with older jazz, and we both learned about each other's music," Christie says. "He introduced me to this whole world of early jazz, and I quickly started to realize that it wasn't so different from what I was doing. Understanding that connection has really been the foundation of my music ever since."

Goodwin also introduced her to Dave Frishberg, who's been based in Portland since he left Los Angeles in 1986, and it was Frishberg who brought in David Evans, the Portland-by-way-of-New Orleans tenor saxophonist and clarinetist. (There's a third instrumentalist on the CD: "In a marvel of coordination and breath control," master jazz historian Doug Ramsey writes in the liner notes, "Retta plays brushes on a snare drum.")

With the exception of "You Always Hurt the One You Love," a hit for the Mills Brothers in 1944, and "'Neath the Purple on the Hills," recorded in 1940 by Cliff Bruner and his Texas Wanderers, all the songs on "Volume 2" date from the 1920s and '30s. Frishberg suggested "A Sailboat in the Moonlight" and "Foolin' Myself," both recorded by Billie Holiday (though he gave her Herb Jeffries's version of the latter). Christie also sings "I Get the Blues When It Rains," "Old Folks," and "I Only Want a Buddy Not a Sweetheart."

"I love working with Dave and David," Christie says. "They're incredibly supportive musically and as friends. They play from their hearts. And Dave [Frishberg] is a fabulous accompanist. You're being delivered something on a silver platter. He makes things so easy."

Retta Christie came by her passion for Western swing very early on. Born in rural Astoria, Oregon, in 1959, she and her family regularly attended community dances at the local Grange hall, which often hosted Western swing bands. "I was absolutely in love with cowboys and horses," she says, "and I liked the music that went with them."

After college graduation (an art degree at Skidmore), she returned to Astoria and before long had launched her Retta and the Smart Fellas, a five-piece Western swing combo. In the mid-1980s she also began working as a deejay, with a radio show focusing on old-time Western swing. For more than a decade, she's hosted a weekly program on KBOO, "The Noontime Jamboree."

Prior to recording with Dave Frishberg (who guested on the first album I ever produced, Yana Purim's self-titled solo debut for RCA) and David Evans, Christie made two Smart Fellas sessions -- "Rural Jazz" (2000) and "They Took the Stars Out of Heaven" (2003) -- for Retta Records, featuring Jim Goodwin on piano, fiddler Kevin Healy, guitarist Jesse Johnson, and bassist Bill Uhlig, with Retta on vocals and rhythm guitar. "They're authentic Western swing players," Frishberg has said, "and they can swing you into bad health."
Posted by Arnaldo DeSouteiro at 7:25 AM