DVD of the Month - "Ron Carter: My Funny Valentine" 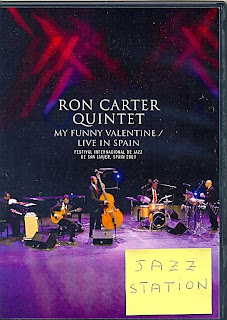 DVD of the Month
Ron Carter: "My Funny Valentine - Live in Spain" (JazzDoor) 2011

This DVD was filmed live at XII Festival Internacional de Jazz de San Javier (Auditorio Parque Almansa, San Javier) Murcia, in Spain, on July 4, 2009 for a TV broadcast. Ironically, when the CTI All Stars -- a group from which Ron Carter was a key member in the 70s as well as one of the main stars of the CTI label -- was preparing to start an European tour (without Carter). A tour that, even more ironically, also included a concert at the San Javier Jazz Festival ten days later, on July 14.

The quintet opens the concert with a 45-minute long suite titled "Jazz & Bossa," which includes several Ron's bossa-oriented originals mixed with two bossa nova anthems: the title track from Antonio Carlos Jobim's "Wave" (Ron's first session with Jobim back in '67, produced by Creed Taylor) and Luiz Bonfa's "Samba de Orfeu," a song I had the honor to produce in 1996 for "Almost in Love - Ithamara Koorax Sings The Luiz Bonfa Songbook," with Carter on bass, reuniting him with his old friend Bonfá, with whom he had recorded many albums in the '60s and '70s). Another Jobim tune, "Chega de Saudade," is listed on the booklet credits, but wasn't performed in the concert. Or was edited-out of the DVD, something I doubt.

Ron introduces the musicians, Guilherme Monteiro leaves the stage, and the bassist speaks: "The good thing about being a leader is that when you 'call a tune' the musicians have to play it." Then he announces his "favorite song," "My Funny Valentine" (previously included in a better version on the Ron Carter/Art Farmer DVD "Live at Sweet Basil"). Monteiro returns to the stage for the final number, a latin-tinged arrangement of "You and the Night and the Music" (first investigated by the bassist on his album "When Skies Are Grey"), which features an excellent solo on the bongos by Rolando Morales-Matos, whose percussive arsenal also includes tamborim (played with the fingers, not with the stick, when used as the only backing instrument on Ron's tour-de-force performance on "Samba de Orfeu"), pandeiro, caxixis, afoche, talking drum, djembe, guiro, mark tree, triangle, bell tree etc. An arsenal that helps the band to get a standing ovation. You did it again, Ron!
Posted by Arnaldo DeSouteiro at 7:27 AM