CD of the Week - "Nicholas Urie: My Garden" 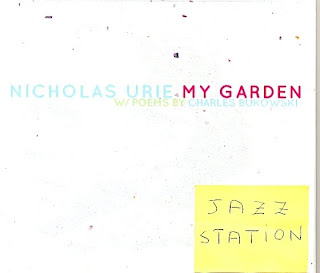 Highlights: "Round and Round," "My Crying," "For Crying Out Loud" and "Finality."

In his new CD "My Garden" (recorded in two sessions on September 30 & October 1st, 2010), composer-arranger Nicholas Urie honors Charles Bukowski's postmodern American poetry by wedding it to some of the most intriguing, scintillating and innovative big band music in the contemporary jazz landscape. Urie is not "a promise" anymore, but rather one of the most creative names in the jazz scene. And the ambitious "My Garden" shall be already considered as a milestone in his career.

Bukowski is best known for his "fratboyesque" musings on love and life that have branded him as a kind of chauvinistic literary bad boy. The poems in this cycle highlight a more personal and less veiled side of a very complicated and diverse figure in American literature. These works are more introspective and touch on the author's feelings of abandonment, depression, isolation and insecurities in the world as both a man and a writer.

Born in Los Angeles, California in 1985, Nicholas Urie was a recipient of the first annual ASCAP Young Jazz Composer’s Award at the age of 17. Soon after, Nicholas left Los Angeles to study composition with Bob Brookmeyer in Boston, MA receiving both bachelors and masters degrees from the New England Conservatory of Music.

Urie’s music has been heard internationally at festivals and concerts in Peru, Syria, Spain, England, Germany, Holland and the United States. Nicholas has an unusually varied background in all forms of composed music bridging the gap between jazz and contemporary music styles. He is an active conductor leading both large jazz ensembles as well as full symphony orchestras performing works that range from straight ahead jazz to contemporary classical music.

Nicholas Urie has frequently collaborated with celebrated vibraphonist Dave Samuels who has commissioned a number of pieces for Big Band and chamber ensembles, most recently commissioning a concerto for Vibraphone and Chamber Orchestra that was premiered by the Berklee School of Music Chamber Orchestra. Nicholas’ music has been performed by Bob Brookmeyer, Vince Mendoza, Frank Carlberg, Chris Speed, Bill McHenry, Dave Samuels, Christine Correa, Joe Martin, Bob Moses, the Metropole Orchestra, Ximo Tebar/Granada Jazz Festival Big Band, the Möbius Chamber Orchestra, the Berklee Chamber Orchestra, and the Jazz Composer’s Orchestra among others.
Posted by Arnaldo DeSouteiro at 7:31 AM