Grady Tate to be honored in Pittsburgh 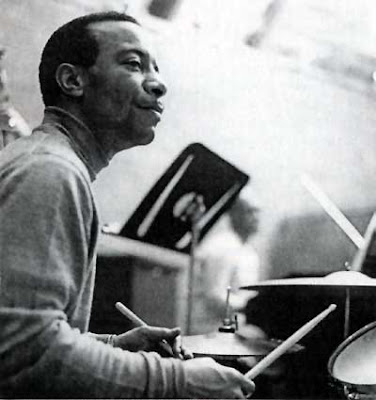 Jazz Series Will Honor Legend Grady Tate
by Bob Karlovits
Pittsburgh Tribune-Review, April 28, 2011When singer and Pittsburgh native Tim Strong grew aware of how some other nations treasure members of their arts community, he decided it was time for that to happen in the United States.

He also decided to honor his mentor, singer and drummer Grady Tate.

"When you look at what he has done on drums, as a singer, or working with programs like the National Jazz Museum in Harlem, you see how important he is," Strong says of Tate.

Part of that honor will come this weekend when Tate and Strong will be here for two live appearances that will be filmed as part of Strong's upcoming documentary on Tate.

Tate is thrilled at Strong's concentration on him, but says the appreciation of his work stems from a fairly simple source.

"I just keep trying to do what I do as well as I can, if not make it better," says Tate, 79, who has led a career as a drummer for acts ranging from Simon and Garfunkel to Duke Ellington. He has appeared on more than 5,000 recordings, include a famous vocal effort, "Windmills of My Mind."

He will perform at a private event at the Hill House this evening and then Saturday at the August Wilson Center, Downtown.

The event at the Hill House will be called "Live at the Hurricane," and will be a tribute to one of Tate's early professional shows, with organist Wild Bill Davis at the now-defunct Hurricane Grill. He remembers it was in the 1960s, but will go no further.

The Saturday show, called "Windmills," after the album, will feature such Pittsburgh-area stars as drummer Roger Humphries and saxophonist Kenny Blake.

Tate's history here will make both of those shows potential parts of the film, Strong says.

Strong's career started here, too. After working with the Benn E. Benack Big Band and the Civic Light Opera, Strong went to New York City, where Tate became a professional and musical mentor for 15 years.

The singer then began traveling the world with his diplomat wife and saw the appreciation for artists in some lands.

That led Strong to forming the National Arts Treasure Initiative, a group he hopes will inspire cultural patriotism for jazz and other forms of American art.

He says he wants to do that by making one or two documentaries a year, which he will distribute through a variety of organizations, including jazz festivals.

It was only natural to pick his mentor as his first subject, particularly when his hometown's heritage came to light, Strong says.

"It has been a stunning career the way he has taken so many people so many places over the years," Strong says of Tate.

If you happen to make it to the August Wilson Center for African American Culture tonight, you just may end up in a film. And it won't be your run-of-the-mill jazz concert, either.

This filming will be for the documentary, "Grady Tate's Windmills," in honor of the veteran drummer and vocalist and the first installment of the nascent National Arts Treasure Initiative.

The goal of Tim Strong, a vocalist, executive director of the project and a musical disciple of Mr. Tate, is to [recognize] living legends. "I want them to be appreciated while they're still on the planet."

The concept was inspired by travels to other lands with his wife, a career diplomat, where Mr. Strong said that someone like Mr. Tate would be considered "a national treasure."

The title of the documentary refers to the 79-year-old Mr. Tate's definitive vocal rendition of "Windmills of Your Mind," which earned him a Grammy nomination in the late 1960s.

Although Mr. Tate is not from this area, "his first professional job was at the Hurricane Lounge with organist Wild Bill Davis," says Mr. Strong -- an alumnus of Braddock High School.

Mr. Strong, who has spent much of his career overseas, met Mr. Tate in the mid-1980s in New York. After Mr. Tate heard Mr. Strong sing on a demo, Mr. Tate told him, "Don't you ever stop doing what you're doing." Mr. Tate even produced Mr. Strong's first acoustic jazz album, which was eponymous, in 1993, and they two have kept in touch since.

No timetable has been set for the documentary's release. The initiative's goal is to release two such biographies per year.

"My gift is to bring this home as well as treat him like the royalty that he is," Mr. Strong says.
Posted by Arnaldo DeSouteiro at 12:43 PM