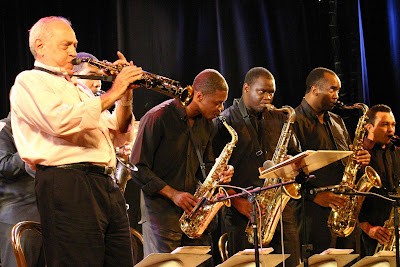 Saxophonist and band-leader, founder of the Rio Jazz Orchestra, Marcos Szpilman passed away yesterday, April 15, 2011, in Rio de Janeiro, Brazil, at age 79, after a long fight against lung cancer. He was the son of the Polish saxophonist and band-leader Waldemar Szpilman, who moved to Brazil in 1925. He is survived by his daughter, the talented jazz & blues songstress Taryn Szpilman.

Marcos recorded six CDs ("Brasil Instrumental," with arrangements by the late Alberto Arantes, is my personal favorite) and one DVD with the Rio Jazz Orchestra, plus one CD leading the Marcos Szpilman Quartet. He played extensively with the RJO for over 30 years, including a memorable performance at the First São Paulo/Montreux Jazz Festival in 1978, with guest stars Paulo Moura, Mauricio Einhorn and Marcelo Salazar. His last gig conducting the RJO was on March 16, 2011, and he had another concert booked for April 18.