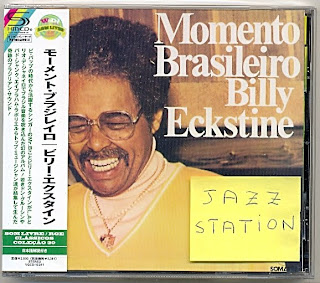 Rating:
***** (musical performance)
**** (sonic quality, because the voice is mixed much higher than the instrumental parts)
**** (remastering)

A treasure! One of the best and, ironically, one of the lesser known albums ever recorded by vocal giant Billy Eckstine (1914-1993). Thirty-five years after having formed his legendary bebop big-band -- which included Miles Davis, Dizzy Gillespie, Dexter Gordon, Art Blakey, Charlie Parker, and Fats Navarro, among other luminaries --, Eckstine embarked in a journey into Brazilian music with the help of producer Aloysio de Oliveira (a key figure in the bossa nova era) and arranger Oscar Castro-Neves. The result was an album originally released only in Brazil, and available only on vinyl, but now finally reissued on CD for the very first time by the Japanese label Ward. With his unmistakable velvet-like voice, Eckstine gives a perfect performance throughout "Momento Brasileiro" (Brazilian Moment).

Oscar & Aloysio were financing the project, but then they entered an agreement with Som Livre, which offered the studios for the mix & the mastering, and purchased the rights to release the album. Actually, Aloysio had more ambitious plans, hoping to sign a deal with Norman Granz's Pablo label for a release in the U.S., like happened with the famous albums he produced in Rio for Sarah Vaughan. However, "Momento Brasileiro" never received international distribution and, even in Brazil, it soon disappeared from the record stores.

The album is full of delightful surprises. The first one is the opening track, "Cidade Maravilhosa," sung with the English lyrics provided specially for Billy Ekstine by Regina Werneck, then Oscar Castro-Neves' wife. Eckstine sings it as a ballad, with Shelly Manne's brushwork showcasing his big influence on João Palma's style, since these two giant drummers were close friends in LA during the '60s -- if possible, take the opportunity to listen to Antonio Carlos Jobim's original recording of "Ligia," from the "Urubu" album with Palma on the drums, and you'll see how the Manne-Palma connection was a two-way street.

The only up-tempo number is "You and I" ("Você e Eu," the bossa standard composed by Carlos Lyra & Vinicius de Moraes, with English lyrics by Norman Gimbel), one of my personal favorite tracks on the album. Propelled by Ray Brown's bass, the baritone singer swings authoritatively, with nice solos by Bud Shank (on alto) and, later on the tag, John Pisano on electric guitar.

Other very special moments? Check the seldom-heard verses of "Corcovado" ("Quiet Nights") and "Vivo Sonhando" aka "Dreamer", both retitled for the American market after Gene Lees' lyrics. Not to mention the English lyrics written by Aloysio de Oliveira's himself to Dorival Caymmi's "Dora," with Eckstine also singing some parts in Portuguese to the point that a resemblance with Caymmi's voice is awesome!

More highlights? The bossa-nova arrangements of "I Apologize" (the Al Hoffman-Al Goodhart-Ed Nelson song composed in 1931, made a hit by Bing Crosby that same year, and which turned into an even bigger hit in 1951 when recorded by Eckstine) and "Where or When," the Richard Rodgers/Lorenz Hart standard from the 1937 Broadway show "Babes in Arms."

When producing Yana Purim's debut solo album for RCA, in 1981, I showed her the Eckstine version of "I Apologize" from "Momento Brasileiro" and suggested her to write Portuguese lyrics. She did and, some months later, we cut the track, featuring João Donato on piano. Retitled "Querendo Você," it appears in some CD compilations I produced for BMG in the early 2000s. And, of course, Diana Krall picked "Where or When" to her "Quiet Nights" album after falling in love with Eckstine's rendition. Classy and charming, as everything he did.
Posted by Arnaldo DeSouteiro at 7:25 AM