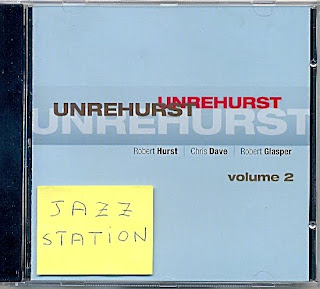 For the last ten years, bassist/composer Robert Hurst's commitments and accomplishments as in-demand sideman (specially after he replaced John Clayton on Diana Krall's band in the middle of her "Quiet Nights World Tour"), film composer, and university educator have left the music world anticipating new recordings from him as a leader. He is now simultaneously delivering two new and very different CDs on his Bebob imprint: "Bob Ya Head," an intriguing foray into world music and electronica (with Darryl "Munyungo" Jackson, Marcus Belgrave, and Karriem Riggins), and "Unrehurst Vol. 2," a 2007 all-acoustic trio date recorded live with Robert Glasper and Chris "Daddy" Dave.

"Unrehurst Vol. 2" is my favorite one. What a great album! What a great trio! What a trip! The 69-minute CD includes five extended tracks selected from material recorded during two nights (March 16 & 17, 2007) in front of a privileged small audience (30 poeple maybe?) at New York's Smoke Jazz & Supper Club-Lounge (located at
2751 Broadway between 105th and 106th Streets.) But it sounds like made in heaven. Hurst, Glasper (playing better than ever) and Dave (a monster, one of the top 5 drummers in the contemporary jazz scene) sound like kindred spirits, blessed by jazz archangels. The kind of magically organic album that shall be described as an "experience."

Hurst says that, due to record-breaking winter storms, the album was recorded without any rehearsal. It's difficult to believe, although I know it's true. Because Hurst, pianist Robert Glasper, and drummer Chris Dave clicked from the moment they hit the bandstand and their solid & flexible empathy is evident from the adventurous performances on the disc, surely one to be included in my list for the Best Jazz Albums of the Year.

I'ts impossible to mention a "highlight," since all tracks are splendid. The program includes three stunning originals (two by Hurst, one by Glasper) and two superb explorations on Cole Porter's "I Love You" (17 minutes and 31 seconds of pure musical joy, in the divine sense of the word) and Thelonious Monk's "Monk's Dream." Sorry for the cliché, but this album is what jazz is all about, a perfect amalgam of intellect and emotion. And the sonic quality equals its massive & extremely rich musical content, revealing all the details of Hurst's fat & warm tone, Glasper's flights throught the keyboard, and Dave's ardent & percussive drumming, full of rimshot lessons.

Hurst describes Chris Dave, one of the most inventive drummers I've ever heard, an updated version of Roy Haynes (actually, think "Haynes meets Dom Um Romao and Paul Motian") plus his own identity, as "an underground, super funky cat." Glasper, the bassist says, "is open to all kinds of music, and he's extremely fearless. It's the gamut of total restraint to total abandon." Btw, Glasper was also featured on "Unrehurst Vol. 1" (Bebob, 2001), with drummer Damion Reid.

The bassist debuted on record as a leader in 1993 with Robert Hurst Presents: Robert Hurst (DIW/Columbia), featuring Kenny Kirkland, Branford Marsalis, Marcus Belgrave, Ralph Jones, and Jeff "Tain" Watts. Most of the music on the disc was specifically written with this exact personnel in mind. The following year, Hurst released a trio session, One for Namesake (DIW/Columbia), with Kirkland and Elvin Jones.

In recent years, the bassist has recorded and toured extensively with Diana Krall and Chris Botti, and continues to do so. He's maintained his long association with Jeff "Tain" Watts and has performed with the drummer's band at the Jazz Standard in New York last January and at the Detroit Institute of the Arts (also featuring Geri Allen) in a couple of months ago.

After the CD release show -- at Detroit's Virgil Carr Center on March 11 -- Hurst is scheduling a series of spring and summer appearances across the nation. He's also preparing a fall 2011 release of "Bob: A Palindrome" (on Bebob), a sextet session with Glasper, Belgrave, Branford Marsalis, Tain Watts, and Bennie Maupin. "Branford recently told me, 'You've got to be brave to do what we do,'" says Hurst. "I boldly agree and look forward to compiling a wealth of work which exemplifies such bravery!"

I "needed" to find a flaw, though, so here I ago: why there are no pics of "the trio" neither of Glasper and Dave alone? Three Hurst pics on the back cover (tray card), plus six people inside the booklet, and no image of the co-stars?!? What's the problem that the four people who worked on the cover artwork have with "sidemen?" 'Nuff said. Better go back to listen to "Unrehurst 2" once again.
Posted by Arnaldo DeSouteiro at 7:22 AM