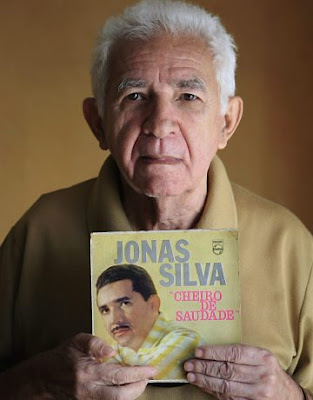 Composer, singer and record executive, Jonas Silva worked in the Mocambo label and later founded his own company, Imagem.

When João Gilberto arrived in Rio, in 1950, from his native small town of Juazeiro (Bahia), he replaced Jonas Silva in the Garotos da Lua vocal group (the Brazilian version of the Pied Pipers). The reason alleged, by his own colleagues, to quit Silva: his voice was very soft, and he used to sing very low. Now you can imagine how they felt when the guy chosen to replace Silva appeared singing even lower and softer! Anyway, they kept Gilberto in the group until 1952, performing regularly at the Tupi Radio and recording some 78rpms.
Jonas Silva’s solo career never launched, but he recorded some singles for various labels, including a cult EP in 1959 with revered versions of Jobim’s “A Felicidade” and Johnny Alf’s “Rapaz de Bem”. Later he moved to the other side of the business, founding Imagem, the first independent Brazilian label specialized in jazz. One of Silva’s own compositions, “Rosinha”, always fascinated João Gilberto, who often played it when among friends, after listening to a demo recorded by Silva in 1954. Then, 36 years later, Gilberto decided to do the first commercial recording ever of “Rosinha”, a saucy tune enlightened by Clare Fischer’s delightfully syncopated arrangement, clearly influenced by Nestor Campos’ scores from the early Fifties.
Posted by Arnaldo DeSouteiro at 7:39 AM