Box Set of the Month - "CTI Records: The Cool Revolution"

The 4-CD box set "CTI Records: The Cool Revolution - A 40th Anniversary Collection," digitally remastered using the original two-track LP masters, includes 39 tracks on 4 themed CDs ("Staright Up," "Deep Grooves/Big Hits," "The Brazilian Connection," "Cool and Classic") and an illustrated 20-page LP-sized booklet with rare photos and liner notes. Featuring the label’s legendary roster of jazz stars, the four discs offer an overview of the golden decade (1970-80) in which CTI’s signature sound and style were born, with each disc highlighting an aspect of CTI’s personality.

It's very difficult to write a "review" about this box compiled by Richard Seidel (with Alex Miller & Cathleen Murphy as executive producers, and Laura Kszan as project director), 'cause people have been commenting about these tracks thousands of times. And, certainly, CTI devotees like Doug Payne, will post insightful & detailed reviews. So, I'll just make some personal comments.

CD1, "Straight Up," focuses on straight-ahead cuts. Things like the famous bluesy opener, Stanley Turrentine's "Sugar" (one of CTI's signature tracks or anthems or whatever you wanna call it, now revived by the CTI All-Star Band in the upcoming CD/DVD "Live at Montreux 2009"), Chet Baker's rendition of "Autumn Leaves" (in counterpoint with Paul Desmond's dry-martini alto sax) in a rare CTI mainstream-jazz moment, and the hard-bop of Freddie Hubbard's "The Intrepid Fox" and John Coltrane's "Moment's Notice" as performed by brothers Hubert & Ronnie Laws. Don't ask me why there are two takes of Miles Davis' "So What" played by Ron Carter (from his "Spanish Blue" album) and George Benson (from "Beyond The Blue Horizon," of course with Ron on bass). Btw, Ron is heard in all 9 tracks of this CD1, another proof that he was the most important sideman during CTI's heyday from 1970 to 1975.

Billy Cobham (then a key member of John McLaughlin's Mahavishnu Orchestra) shines specially on the Stanley Turrentine/Milt Jackson funkyfied reading of Lee Morgan's bop gem "Speedball" as well as on Randy Weston's bop-waltz "Ifrane," the superb & long-forgotten big-band opening track (featuring an amazing "duel" between Freddie Hubbard and Grover Washington, Jr. in a brilliant Don Sebesky arrangement) from one of CTI's best & most-underrated superb albums, "Blue Moses," for now reissued on CD only in Japan. Randy's sole session for CTI had been ignored in all compilations previously released for the USA market by CBS/Sony/Epic. And both Freddie & Grover are also featured on "Free As A Bird," from Sebesky's masterpiece "Giant Box," with the low-profile maestro playing both accordion & Fender Rhodes, although Bob James does the acoustic piano solo.

Titled "Deep Grooves/Big Hits," CD2 starts appropriately with Hubbard's "Red Clay" (the first CTI crossover-jazz hit), continues with some tracks originally from CTI's main subsidiary Kudu label -- Johnny Hammond's "It's Too Late," Esther Phillips' "Home Is Where The Hatred Is," -- and goes ahead with the amazing charts that Sebesky provided for the jazzy renditions of pop/rock tunes originally supplied by Jefferson Airplane (the title track from Benson's "White Rabbit") and James Taylor ("Fire and Rain," as covered by Hubert Laws).

Then, suddenly comes Esther Phillips' disco-grooved "What a Difference A Day Makes" (CTI's biggest hit ever on the dance-music territory, thanks to Joe Beck's arrangement), Deodato's "Zarathustra/2001" (CTI's mega pop hit in '73) and, sandwiched between them, the Joe Farrell/John McLaughlin exquisite collaboration on "Follow Your Heart," a great track that doesn't has a "deep groove" and neither was a "big hit." The same "problem" with Hank Crawford's "We Got A Good Thing Going," the title track from an album that had been terribly remixed by Larry Keyes for a CD release in 1987. Grover's funky-hit "Mister Magic" (a track now owned by Universal since Motown, now part of UMG, got the control of Grover's albums for Kudu after a law suit against CTI in '76), ends the disc.

Some people really don't know that track sequencing is an art. Period.

Anyway, now we are listening to CD3, "The Brazilian Connection." Oops, they probably meant "The Brazilian Tinge," I guess. Because, alongside Brazilian songs performed by Jobim ("Stone Flower" and an alternate take of "Brazil" that doesn't sounds better than the official take), Astrud Gilberto (Edu Lobo's "Ponteio," with Toots Thielemans guesting on harmonica and Sivuca on acoustic guitar, both propelled by drummer Joao Palma's dexterity, with another Brazilian giant, Dom Um Romão on percussion), Stanley Turrentine (Milton Nascimento's "Salt Song" arranged by Deodato with Airto on drums & congas), Paul Desmond (Jobim's "Wave," a track added to the CD reissue of "Pure Desmond" but not included in the original LP), Deodato's own "Carly & Carole" (his homage to Carly Simon & Carole King) and Airto's acid-jazz classic "Tombo in 7/4," well, besides all these Brazilian songs, appear some cuts that have just some light Brazilian or Latin influences.

Such is the case of Hubbard's tunes "First Light" and "Sunflower" (the latter recorded on a session led by Milt Jackson), as well as Airto's performance of Chick Corea's fusion groundbreaking hymn "Return To Forever," with the original group members - Chick, Stanley Clarke, Flora Purim, Joe Farrell and Airto - augmented by a brass section (3 trumpets & 3 trombones) arranged by Sebesky. Clare Fischer's "Pensativa" was originally conceived as a bossa nova, but there's no bossa beat or hint (or heat) either on John Murtaugh's score for flute & strings (no rhythmic section) used by Hubert Laws on "Wild Flower" and later reprised on "The San Francisco Concert," added as a bonus track on its CD reissue produced by Didier Deutsch. It would have been much better if two pieces by Villa-Lobos -- Brazil's most important classical composer ever -- could have been chosen: "Aria from Bachianas Brasileiras #5" (recorded on Jackie & Roy's "Time & Love") and "Little Train" (sung by Airto on Benson's "White Rabbit").

CD4 puts together a selection titled "Cool and Classic." Certainly, the opening track, "My Funny Valentine," performed by Chet Baker & Gerry Mulligan on their 1974 "Carnegie Hall Concert," contains the essence of cool-jazz. Another Chet vocal take, "What'll I Do," in a lush string arrangement by Sebesky, fits well too. Kenny Burrell's "A Child Is Born," featuring Richard Wyands on piano and George Ricci on cello? OK. Ron Carter's "All Blues," despite a sound problem in the left channel, before Joe Henderson's appearance, sounds cool and classy.

Don Sebesky's haunting score to Joni Mitchell's ballad "Song To A Seagull" is hip, very very hip. The essence of natural elegance and sophistication also showed on his adaptations of Faure's "Pavane" (Hubert Laws) and Rodrigo's "Adagio from Concierto de Aranjuez" (Jim Hall's landmark 19-minute performance with Chet Baker, Paul Desmond and Roland Hanna providing great solos). Classic pieces in all senses indeed. But Bob James' radio hit "Westchester Lady" (a track licensed by James himself, who controls all his solo albums for CTI after winning a law suit against the label in '77) and Benson's "Take Five" (with a splendid Kenny Barron solo on Fender Rhodes) would fit better on that "Deep Grooves/Big Hits" disc. Do I need to explain why?

Last but not least: in spite of the great musical content and the fantastic work of Roxanne Slimak in preparing the elegant art direction & graphic design for the LP-sized booklet, there are countless mistakes and omissions in the credits of the musicians listed in each track. Among them:
- my favorite "acoustic jazz guitarist" ever, Gene Bertoncini, is omitted on Hubert Laws' "Fire and Rain," a track on which he plays a pivotal role in Don Sebesky's score;
- keyboardist David Horowitz is credited as playing "synthesizer" on Randy Weston's "Ifrane," but there's no synth (and no other keyboard besides Weston's own Fender Rhodes) on that superb track; Horowitz played Moog synthesizer in only one track from Weston's "Blue Moses" LP, but that wasn't "Ifrane";
- three backing vocalists are listed on Stanley Turrentine's "Salt Song," although there were no vocals at all on that track (they sang only on another song, "I Told Jesus," from that album)...my dear late friend Richard Tee is also credited as playing "organ" on the same "Salt Song," but he didn't took part of the track and there was no organ on Deodato's arrangement;
- Jay Berliner is listed as guitarist on Milt Jackson's "Sunflower," but there's no guitar on that track, only on "For Someone I Love," which wasn't compiled here;
- and, still speaking of guitarists, Earl Klugh is credited on the title track from George Benson's "White Rabbit" album, but he only recorded in another tune, "El Mar";
Well, the list of mistakes goes on and on, and even photographers like Duane Michals (responsible for that famous Deodato shot used on page 10 of the booklet, the same one originally included in the liner cover of "Prelude") and Alen MacWeeney are not mentioned. Sad.
The box set is already available at DustyGroove through the link below:
http://www.dustygroove.com/item.php?id=dcr6tzgcfx

That's what they say:
A well-titled little set – as the collection is as cool as the sound of CTI Records back in the 70s! The unique package features an LP-sized cover – just like one of the CTI gatefold albums from back in the day – which contains 4 different CDs, each with a slightly different take on the sound of the legendary label! CD 1 is titled Straight Up – and features amazing 70s jazz from Hubert Laws, Ron Carter, George Benson, Randy Weston, Freddie Hubbard, and others. CD 2 is titled Deep Grooves/Big Hits – and features some killer numbers by Esther Phillips, Johnny Hammond, Freddie Hubbard, Deodato, Joe Farrell, and Hank Crawford. Next is CD 3, The Brazilian Connection – a beautiful demonstration of Creed Taylor's love of sounds from Rio and beyond – filled with great work from Airto, Paul Desmond, Antonio Carlos Jobim, Stanley Turrentine, Milt Jackson, and Deodato. Last up is Cool & Classic – the 4th CD, with CTI-remade work by older players such as Gerry Mulligan, Chet Baker, Kenny Burrell, and Jim Hall – all a perfect fit for the label's new sound of the 70s! The package also features an LP-sized booklet – filled with notes and rare images! © 2010, Dusty Groove America, Inc. 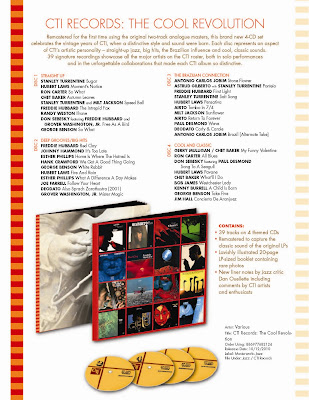 Posted by Arnaldo DeSouteiro at 6:22 AM