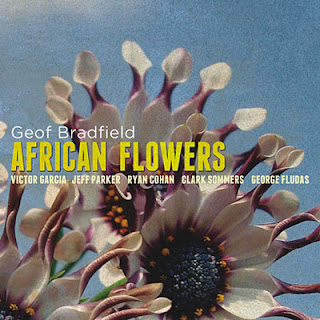 "African Flowers" is a big, bold, inspired suite of original music by saxophonist/composer Geof Bradfield that draws on his experiences traveling and performing in Africa in early 2008. During the course of a month-long tour of Rwanda, Congo, Uganda, and Zimbabwe as a member of pianist Ryan Cohan's quartet, Bradfield absorbed, reflected, and synthesized. The powerful fruits of his creative journey may be heard on African Flowers, his second CD for the Origin label (recorded in October 2009 and released on September 21, 2010) and third overall as a leader.

The tour in question was arranged under the auspices of The Rhythm Road: American Music Abroad, a program co-sponsored by the U.S. State Department and Jazz at Lincoln Center. Even before he'd left Chicago, Bradfield had in mind to compose and perform "an extended work for sextet blending African melodies and rhythms with elements of modern jazz."

Ryan Cohan is on hand for the recording, along with guitarist Jeff Parker, bassist Clark Sommers, drummer George Fludas, and excellent trumpeter/percussionist Victor Garcia. "We spent our time in Africa together checking out a lot of music," Bradfield says of Cohan, his longtime friend and musical partner. "We have similar interests in that vein. He has a deep rhythmic conception."

The suite consists of nine main songs with interludes by the ensemble and solo piano, drums, and bass. "All the pieces use motifs from other pieces," Bradfield says. "There's no piece that stands alone, that isn't in some way connected to another."

Portions of the suite were inspired by Baganda xylophone music of Uganda, taarab of Kenya and Tanzania (a genre-bending music blending stylistic elements of Africa, the Middle East, and Europe), and Congolese rumba. The opening track "Butare" is based on a Rwandan praise song. But there's nothing academic about African Flowers, a work of great passion, vision, and virtuosity by Geof Bradfield and his collaborators.

Bradfield, who critic Neil Tesser says has "in the last few years quietly established himself among Chicago's truly elite saxophonists," was born (in 1970) and raised in Houston, where he attended the prestigious High School for the Performing and Visual Arts. He earned his undergraduate degree at DePaul University in Chicago and his master's at California Institute of the Arts in L.A. There his instructors included Charlie Haden, Albert "Tootie" Heath, Joe La Barbera, Roscoe Mitchell, and Leo Smith. From Haden he learned "that your music should reflect whatever your beliefs and life experiences are" and that "anything goes."

From 1994 to 1997 Bradfield lived in Brooklyn, working with many other forward-looking jazz players on the New York scene. He returned to Chicago and freelanced for several years with bands including the Mighty Blue Kings, Ted Sirota's Rebel Souls, the Ryan Cohan Quartet, and his own trio. Bradfield taught at Washington State University in Pullman from 2000 to 2003, and relocated to Chicago once again in late 2003, taking a faculty position at Columbia College.

That year Bradfield released his well-received debut, Rule of Three (Liberated Zone), with bassist Noel Kupersmith and drummer Ted Sirota. Urban Nomad (Origin), which followed in 2008, was a quartet date with pianist Ron Perrillo as well as longtime colleagues Clark Sommers and George Fludas, whose affiliation with the saxophonist dates back to his days at DePaul.

Geof Bradfield is looking forward to bringing the music of African Flowers to the stage. He debuted the material at several Chicago concerts in October 2009, and scheduled three CD release events in the Chicago area with his sextet this fall: at the Jazz Showcase 10/13, at Room 43 (Hyde Park Jazz Society) 10/17, and at S.P.A.C.E. in Evanston next November 10. "With African Flowers," says Bradfield, "I hope to communicate to the listener the expansive spirit and deep soulfulness I experienced as a traveler in Africa."