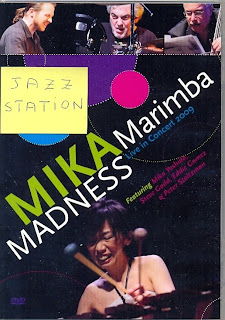 Like Steve Gadd says in the back cover: "Mika is a force of nature!"
Probably the greatest marimba player in jazz since Red Norvo and Bobby Hutcherson, the NY-born Japanese talent Mika Yoshida recorded this DVD in a concert in Tamana City, Kumamoto, Japan.
She leads a powerful quartet with her producer Gadd (drums), Eddie Gomez (acoustic bass) & Peter Stoltzman (acoustic piano), opening with Bill Douglas' "Jubilation" and closing with Chick Corea's tour-de-force "Spain," followed by the lovely Bob Becker's "Girlfriend's Melody."
But the highlights are Eddie Gomez's 14-minute long "Mika Suite," Alice Gomez's "Rain Dance," Gadd's own "The Duke" (originally recorded on Gadd's 1984 debut CD as a leader, "Gaddabout" -- btw, co-writer David Matthews is not credited here) and the jazz classic "Caravan," a big hit composed for Duke Ellington Orchestra by trombonist Juan Tizol, a victim of typo here, being mispelled Jaun Tizol (sic).
There are some editing video problems -- the bad shot on Gadd's snare and the presence of an assistant behind him throughtout the concert looks very strange -- and I don't like the fact that all applauses after each and every tune end abruptly in fade-out, but the musical content is impeccable. Highly recommended to all the fans of both Gadd & Gomez, as well as to marimba lovers.
Posted by Arnaldo DeSouteiro at 7:40 AM