Tonight Is The Night: CTI All Stars at Montreux!

Tonight, at the Miles Davis Hall of the Montreux Jazz Festival, the CTI All Stars 2009 Band makes its debut concert. The official line-up consists of Hubert Laws (flute), Randy Brecker (trumpet), Bill Evans (tenor & soprano sax), Russell Malone (guitar), Niels Lan Doky (piano & keyboards), Mark Egan (electric bass), Jeff "Tain" Watts (drums), Airto Moreira (percussion) and Flora Purim (vocals) besides, obviously, CTI's boss Creed Taylor, who will be touring with the band. Todd Bashore is contributing with the arrangements and will also perform as saxophonist. There are rumors that Jamie Cullum (who closes the night), John McLaughlin and George Duke will sit in with the superband. Uncle Creed and all the musicians arrived in Montreux yesterday, except Randy Brecker, who is expected at any moment coming from a gig in Canada.

The program will include "Red Clay" and "First Light" in tribute to Freddie Hubbard as well as other CTI hits as "Sugar" (Stanley Turrentine), "Road Song" (Wes Montgomery), plus lesser known songs as "Use Me" (recorded by Esther Phillips on "Alone Again, Naturally"), "She Was Too Good To Me" (from the Chet Baker album of the same title) and "San Francisco River" (from Airto's "Fingers").

Anders Bergcrantz and Bill W. Ketzer will be, respectively, the trumpeter and the drummer in the Istanbul concerts produced by Creed Taylor on July 8 & 9. 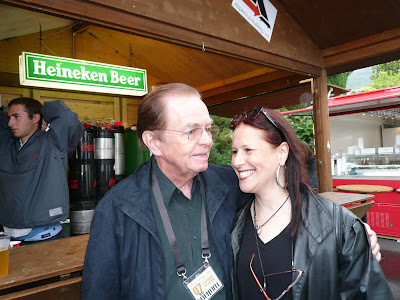 (Creed Taylor & Ithamara Koorax having a Heineken beer in Montreux, during a break of the "CTI All Stars Band 2009" rehearsal) 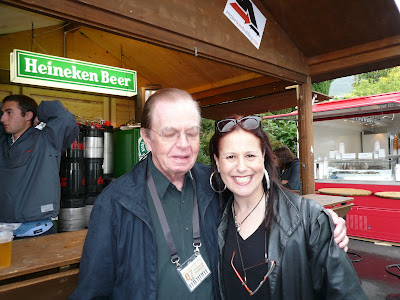 This is the complete schedule for the European tour, from July 7 to 15, of the CTI All Star supergroup (aka CTI Reunion Band). Their opening gala concert at the Miles Davis Hall of the Montreux Jazz Festival, which will be filmed in HighDefinition for a DVD release -- according to the first-hand info I got from CTI historian Doug Payne a couple of months ago -- is now sold-out. The tickets for the concert at the Northsea Jazz Fest, on July 10, are also selling well.

The CTI name (Creed Taylor Incorporated) stands for a multi-generational family of musicians who adhere to the musical values and quality criteria that was established by Creed Taylor and his associates decades ago.

Aside from an impressive lineup, all musicians of the highest caliber, a special emphasis should be made on the band's organizer Creed Taylor, who just turned 80 last May. The legendary producer recorded many albums with The Creed Taylor Orchestra in the 50s, and put together several CTI All Stars groups in the 70s. Eventhough his own name may not be instantly recognizable by all, his music remains the most popular and commercially successful in the history of jazz.

His multi-Grammy Award winning 1963 production "Getz/Gilberto" album has sold 42 million copies to date and still to this day sell 250,000 full price units each year without any promotion whatsoever - and the album is on Rolling Stone Magazine's list of The Greatest Albums Of All Time. And more recently, the rapper Dr. Dre has sold 8 million copies of the hit single "Nigga Witta Gun" which was built around a Creed Taylor sample from his CTI catalogue.

And the further list of acclaimed artists that Creed Taylor has produced is endless and speaks for itself (Hubert Laws, George Benson, Ron Carter, Antonio Carlos Jobim, John Coltrane, Wes Montgomery, Bill Evans, Oliver Nelson, Freddie Hubbard, Airto, Gil Evans, Bob James, Don Sebesky, Larry Coryell, the list goes on and on) and so does the list of modern day hip hop and rap artists who have sampled him (LL Cool J, Snoop Dogg.....). In other words, the music of Creed Taylor is - without comparison - present in far more minds than the music by any other jazz producer alive today.

"The CTI All-Stars 2009 is not a nostalgia/tribute-to-the-past band, but a new current CTI band that Creed Taylor is putting together to perform and record with, with music written specifically for this band," says Nels Lan Doky. "The band will of course continue in the same path and with the same high quality values as always, but we want to move forward not backwards musically, so it is therefore important to have some new players involved. However, most do have a substantial prior history with CTI, including Airto, Hubert Laws, Mark Egan, Randy Brecker and of course Creed Taylor himself."

Brecker, who recorded dozens of CTI session as sideman and also was featured on the CTI Superband that recorded/filmed the "Chroma: Music on the Edge" project in 1990, unfortunately will not perform on the concerts in Turkey: "I couldn't do that one on July 8-9th as part of Istanbul Jazz Fest. I'm playing at Warsaw Jazz Days on July 8th with orchestra a piece that was written for me by pianist Wlodek Pawlik called 'Tykocin' about my polish family roots...we did a CD which is out in Poland and got all kinds of awards and was featured in the polish Newsweek..it will be out in the US soon on Summit Records," explains Randy, who will be replaced by Swedish trumpeter Anders Bergcrantz in the Istanbul nights, while Bill W. Ketzer will take the drum chair, replacing Jeff Watts.

"Our task from a marketing point of view will be to communicate the above facts efficiently, so that we in fact do reach the very substantial audience that CTI music has," Creed adds.
Also in Montreux this morning: 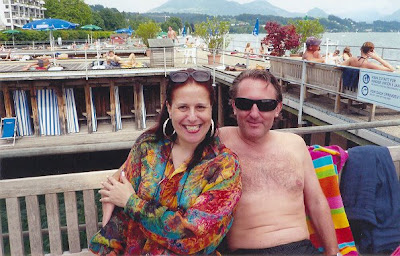