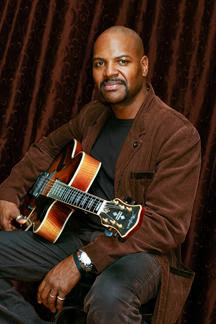 Just three weeks after its release, "Bobby Broom Plays for Monk" is one of the most-played CDs in the country. Featuring the Chicago-based guitarist with his longtime working trio, the CD is currently placed at number 5 with a bullet on the JazzWeek national airplay chart. Broom is taking advantage of his exposure on jazz radio by hitting the road with bassist Dennis Carroll and drummer Kobie Watkins.

First, Broom plans a CD release event at Chicago's Green Mill on Friday 8/7 and Saturday 8/8. The trio, which has held a weekly gig at Pete Miller's in Evanston, IL for more than a decade, makes its New York debut at Birdland on 8/18 (Broom is Harlem-born, and raised on the Upper West Side). They're also scheduled to play the Redmoor in Cincinnati 8/20; the Jazz Kitchen in Indianapolis 8/21; Blues Alley, Washington, DC 9/29; and the Firefly, Ann Arbor 10/2. Other dates are in the works.

"I got my jazz upbringing and cut my teeth in my career as a New Yorker," says Broom. "Having been born and bred in the city, that's an everlasting part of who I am. I feel good about coming back home for the opportunity to bring my group there to play. I'm looking forward to visiting all of the cities on these upcoming dates because I know that jazz fans have heard a little of what we're doing in recent years via our recordings. I want to let people get to know this group even better."
Posted by Arnaldo DeSouteiro at 11:59 AM