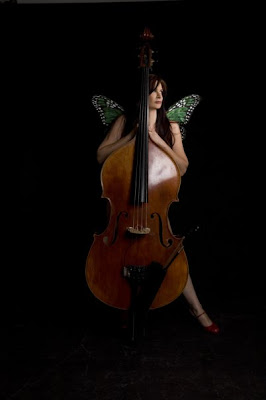 The Jennifer Leitham Trio, led by bassist/vocalist Jennifer Leitham with Josh Nelson (piano) and Randy Drake (drums), will be performing tonight, July 29, from 8 to 11pm, at the "Cafe 322" in Sierra Madre, California. Leitham was praised by the late jazz historian Leonard Feather as "the left-hand virtuoso of the upright bass."

Cafe 322 is an amazing combination of excellent, affordable gourmet Italian cuisine and world class music. Nestled in the foothills of Sierra Madre, (near Pasadena), it's truly a cultural gem, a rarity in the artistic wasteland of L.A.

****************
In addition to her successful performance career, Jennifer has appeared on over 100 sessions with some of the giants of jazz music. In addition, she has recorded 7 highly acclaimed CDs of her own.

Jennifer is best known for her decade long stints with both Mel Tormé and Doc Severinsen. She has appeared with many distinguished artists including Woody Herman, George Shearing, Gerry Mulligan, Peggy Lee, Joe Pass, Cleo Laine, Louie Bellson, Pete Rugolo, Bill Watrous, and numerous others. She has also been a member of the Tonight Show All-Stars, The Woody Herman Thundering Herd, Benny Carter Quintet, Bob Cooper Quartet, DIVA, and more.

Jennifer has been invited to perform as a featured artist or group member at almost every major jazz festival in North America and many overseas. A highly regarded educator, she is enthusiastically received as a presenter of workshops and clinics at schools and colleges around the country, and has joined the faculty at California State University Long Beach as a Studio Artist.

Jennifer's own highly regarded CD's include "Leitham Up," "The Southpaw," "Lefty Leaps In," "Live!" and "Two for the Road" (a duo performance with guitarist Jimmy Bruno). Her sixth CD, "The Real Me" features her original compositions and for the first time, her singing voice. Jennifer's latest CD "Left Coast Story" is a collection of requests from her loyal fans. From her unique arrangements of "West Side Story" to heartfelt vocal ballads to interpretations of compositions ranging from Henry Mancini to Emily Saliers of the Indigo Girls to to a Flamenco tinged solo bass version of Vince Guaralidi's "Cast Your Fate to the Wind" it's a collection that continues the tradition of Jennifer's ear pleasing art!

Her incredible story has been profiled in many respected publications, including JazzTimes, The Hollywood Reporter, Cadence, and the Los Angeles Times.
Posted by Arnaldo DeSouteiro at 7:36 AM