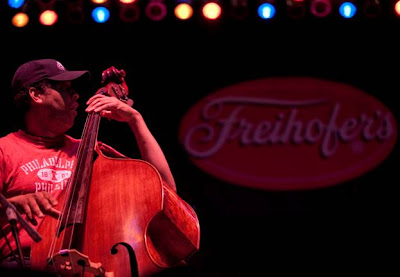 The Festival, which has been part of SPAC's summer season for 32 years, is the northeast’s premier jazz festival, featuring more than 20 performances by established and emerging artists from across the jazz spectrum. It has become a destination event for jazz aficionados who appreciate the quality of the music as well as its exceptional setting and amenities.

“It is an honor for me to be co-presenting the Freihofer’s Saratoga Jazz Festival with SPAC. Marcia White and her team are tremendously committed to the Festival, its artists and audiences and that shows in the quality of the event we are able to offer. The artists love coming to Saratoga. Enhancing it all is SPAC’s incredible setting in the Spa State Park with its large lawn, perfect for picnicking and relaxing. As one longtime jazz fan said to me, ‘the music is always great, but it’s all about the ‘hang’ in Saratoga.’ Very simply, the Freihofer’s Festival has it all,” said Melnick.

“We are grateful that in these difficult economic times, attendance for the Freihofer’s Saratoga Jazz Festival increased over last year. It’s a result that underscores the strength of the program developed by our partner Danny Melnick, President of Absolutely Live Entertainment and it also suggests that people are prioritizing quality time and experiences with family and friends, perhaps now more than ever,” said Marcia J. White, SPAC’s President & Executive Director.

“It was wonderful to see colorful umbrellas and blankets spread from one end of our lawn to the other as people came together to enjoy a weekend of jazz and relaxation. They came with sumptuous picnics, cold drinks, games and books. They browsed at the fine arts and crafts fair, ate barbeque and strolled our stunning grounds in the Spa State Park. It was a weekend of great music, great fun and great memories – the quintessential SPAC experience,” she concluded.

Located in Saratoga Springs, New York, SPAC has been the site of the Freihofer's Saratoga Jazz Festival since 1978. With an inside seating capacity of 5,200 and lawn seating of 20,000, and just three hours driving time from Boston and New York, SPAC's jazz festival draws thousands of jazz aficionados from across the Northeast, the U.S. and Canada. Jazz greats who have performed at the Saratoga Festival in past years include Miles Davis, Chick Corea, Wayne Shorter, Ray Charles, Dizzy Gillespie, Joshua Redman, Herbie Hancock, Etta James, Chris Botti, Boney James and Diana Krall among others.

SPAC and Absolutely Live are already in discussion about an exciting artist line-up for Freihofer’s Saratoga Jazz Festival next year, June 26 & 27, 2010.
Posted by Arnaldo DeSouteiro at 6:32 AM