Luiz Bonfá's "The Gentle Rain," the first song by a Brazilian composer ever recorded by Diana Krall (on her 1997 album "Love Scenes" for GRP), is being revived by DK and Barbra Streisand on their collaboration project "Love Is The Answer." Although, for strange marketing purposes, she was oriented to not mention this song nor Bonfa's name in the interviews for the promo campaigns of both "Quiet Nights" and "Live in Rio," the fact is that the main theme written by Bonfá for the soundtrack of the Burt Balaban movie "The Gentle Rain" (a film released by Paramount in 1966) was the first Brazilian song that Diana fall in love with.
In the liner notes that Barbra herself prepared for the CD, she wrote: "I used to warm up to Gentle Rain every night before my last concert tour. I was especially drawn to the melody of this bittersweet bossa nova. Composer Luiz Bonfá also wrote the gorgeous Manhã de Carnaval, theme from the movie Black Orpheus which introduced the whole world to the rhythms of Brazil. Diana's solo captures the essence of a gentle rain."
Btw, Diana plays piano only on four tracks: "In the Wee Small Hours," "Gentle Rain," "Here's That Rainy Day" and "Love Dance". Actually, she overdubbed her beautiful solo on "In the Wee Small Hours of the Morning," since Tamir Hendelman plays on all other segments of the song, backing Barbra's vocal part.
(Wilson, Hamilton, DK, Barbra, Clayton & Hendelman)

The other musicians on the session were pianists Alan Broadbent (the official conductor of DK's "Quiet Nights World Tour" in every concert on which an orchestra is involved, like happened throughout the Canadian leg) and Bill Charlap, bassists John Clayton and Robert Hurst, drummer Jeff Hamilton, guitarist Anthony Wilson (who also scored "Love Dance"). Paulinho da Costa, the Brazilian percussionist, who performed on Diana's "Live in Paris" and "Live in Rio" DVDs, as well as on her studio dates "The Look of Love" and "Quiet Nights," appears on the two bossa-tinged tracks: "Gentle Rain" and "Love Dance".

(The original soundtrack for "The Gentle Rain," recorded in 1965, produced by Bobby Scott for Mercury Records with orchestral arrangements by Eumir Deodato, was reissued on CD only in Japan, back in 2006, in a mini-LP sleeve; the movie, produced & directed by Burt Balaban, starring Christopher George & Linda Day, was filmed in Rio, and became a complete fiasco. However, its soundtrack turned to be a legendary movie score, yielding the hits "The Gentle Rain" (made famous by Tony Bennett on his "The Movie Song Album" for Columbia, with Bonfá himself on the guitar) and "Non-Stop To Brazil" (Astrud Gilberto did the first vocal version on her "The Shadow of Your Smile" album for Verve, titled after Mandel's song. A lot of "coincidences", hum?)
But there's more: both "The Gentle Rain" and "Non-Stop To Brazil" were selected by producer Arnaldo DeSouteiro (Bonfá's longtime producer) for the album "Almost In Love / Ithamara Koorax Sings The Luiz Bonfá Songbook," recorded by Koorax with Bonfá on the guitar, and a Top 10 CD in Japan in 1996. Koorax also recorded, under DeSouteiro's production, Ivan Lins' "Love Dance," the #7 track on Barbra Streisand's "Love Is The Answer"...

Btw, Bonfá and I attended Diana's so-and-so concert at the Free Jazz Festival in Rio, in 1997, when she was backed only by Ben Wolfe on bass and Russell Malone on guitar. That night, DK's performance was affected by the terrible acoustics of the "cement hall" on which she was forced to perform. Curiously, that same old & phantasmagoric hall (on Rio's "MAM" - Museum of Modern Art) now became the "Vivo Rio" hall (still with horrible acoustics) on which the "Live in Rio" DVD was filmed last November.
About the collaboration with Barbra, Diana Krall wrote in the liner notes: "So, how do you start to work on a record such as this? A shot in the dark, a chance remark, a list of songs in the mail. Short notes and conversations, a few cocktails and some laughter. These are the steps you take."
Obviously, everything becomes easier when you have a super-team taking care of the, let's say, "technical aspects": co-producer Tommy LiPuma, engineers Al Schmitt & Steve Genewick. Not to mention the genius Johnny Mandel orchestrating most of the songs during sessions that took place last at Capitol Studios, in Hollywood, last November, soon after the filming of DK's "Live in Rio" DVD.
The final song selections for "Love Is The Answer," the eagerly awaited new studio collection of intimate jazz standards performed by Barbra Streisand, were revealed today, June 27, by Sony Music-NY in anticipation of the album's release on Tuesday, September 29. It's the first full-length collection of new studio recordings from eight-time Grammy award winner Barbra Streisand since 2005's "Guilty Pleasures."

According to the Columbia press-release, "'Love Is The Answer' showcases the artist as a singer of emotional clarity, depth and maturity, offering the listener a selection of heartfelt late-night meditations on love's powers, heartbreaks and solaces. 'Love Is The Answer' provides an opportunity for Streisand to work for the first time with the Grammy-winning Canadian jazz artist Diana Krall and her quartet who bring a refined and sensual poignancy to the album's sophisticated and subtle accompaniments."

Rounding out the album's smoky after-hours ambience with his sublime orchestrations is the legendary songwriter ("The Shadow of Your Smile") and Grammy-winning arranger Johnny Mandel, who worked with Streisand on her 1993 "Back to Broadway" album as well as arranged/conducted/co-produced Krall's 1998 Grammy-winning "When I Look In Your Eyes," a groundbreaking album on her career; DK's first CD issued on the Verve label and the one that catapulted her to a new standard of pop-jazz star, after years being marketed as "a promise" on the mainstream jazz field.

"Love Is The Answer" will be simultaneously released in two issues: a standard one and a "deluxe" version.

The deluxe package is a two-CD set that features the Mandel arranged orchestra versions on disc one (with 13 tracks) and quartet counterparts on disc two featuring Barbra accompanied only by quartet (piano, bass, guitar & drums) on 12 tracks, without the orchestral scores added after the basic tracks had been recorded.

Besides "The Gentle Rain" (with English lyrics by Matt Dubey; in Brazil, it was recorded as "Canção do Encontro" by the Quarteto 004 in 1968, with Portuguese lyrics by Maria Helena Toledo, Bonfá's wife at that time), included among the highlights of "Love Is The Answer" are:

"Make Someone Happy," a song from the 1960s musical "Do Re Mi," with lyrics by Betty Comden & Adolph Green and music by Jule Styne, who wrote the music for Streisand's breakout performance in "Funny Girl";

“In The Wee Small Hours Of The Morning” – the jazz standard closely associated with Frank Sinatra, and a song that had been originally selected for Krall's "Quiet Nights," but didn't make the final album tracklist;

“If You Go Away (Ne Me Quitte Pas)” – A quintessential version of the Jacques Brel standard performed in English and French;

"Spring Can Really Hang You Up," a song Streisand first sang in a St. Louis club at the age of 18. This is her first studio produced version of this jazz standard from 1955, with lyrics by Fran Landesman and music by Tommy Wolf;

According to Sony's press-release, “Gentle Rain” is "a gentle bossa nova from “Black Orpheus,” the motion picture which introduced the world to the rhythms of Brazilian music." Jesus! They don't know it comes from another movie? Are they thinking that "Manhã de Carnaval" and "The Gentle Rain" are the same song?!? Unbelievable!!!

"Smoke Gets In Your Eyes," the quintessential dreamy standard, originally written as a show tune by Jerome Kern and Otto Harbach for the 1933 operetta "Roberta," covered by Nat "King" Cole and the Platters, among others;

"Some Other Time," a rarely-covered gem composed by Leonard Bernstein with lyrics by Comden and Green from the 1944 musical "On The Town."

Curiously, there are two tracks - "Here's To Life" and "Where Do You Start?" - that had been originally composed, by Artie Butler and Johnny Mandel respectively, for Shirley Horn's masterpiece "Here's To Life", arranged/produced by Mandel himself in 1992. Not to mention that a third tune, Mandel's "A Time For Love", was also recorded by Shirley on that very same album! Oh, and "Here's To Life" is the opening track on both Horn's and Streisand's albums...

Here's the complete tracklist for "Love Is The Answer":
1. "Here's To Life" (Artie Butler/Phyllis Molinary)
2. "In The Wee Small Hours" (Bob Hilliard/David Mann)
3. "Gentle Rain" (Luiz Bonfa/Matt Dubey)
4. "If You Go Away" (Jacques Brel/Rod McKuen)
5. "Spring Can Really Hang You Up The Most" (Tommy Wolf/Fran Landesman)
6. "Make Someone Happy" (Jule Styne/Betty Comden/Adolph Green)
7. "Where Do You Start?"(Johnny Mandel/Alan Bergman/Marilyn Bergman)
8. "A Time For Love" (Johnny Mandel/Paul Francis Webster)
9. "Here's That Rainy Day" (Johnny Burke/Jimmy Van Heusen)
10. "Love Dance" (Ivan Lins/Gilson Peranzzetta with English lyrics by Paul Williams)
11. "Smoke Gets In Your Eyes" (Jerome Kern/Otto Harbach)
12. "Some Other Time" (Leonard Bernstein/Betty Comden/Adolph Green)
13. Bonus Track - "You Must Believe In Spring" (Michel Legrand/Alan & Marilyn Bergman)
The deluxe package includes the following bonus disc:
(Vocal With Quartet)
1. "Here's To Life"
2. "In The Wee Small Hours"
3. "Gentle Rain"
4. "If You Go Away"
5. "Spring Can Really Hang You Up The Most"
6. "Make Someone Happy"
7. "Where Do You Start?"
8. "A Time For Love"
9. "Here's That Rainy Day"
10. "Love Dance"
11. "Smoke Gets In Your Eyes"
12. "Some Other Time"
* * * * *
According to the RIAA, Barbra Streisand is the #1 best selling female recording artist in history and the only woman to make the Top 10 all time best-selling artists list, which includes Elvis Presley and The Beatles. Over the course of her career, Streisand has recorded 50 gold, 30 platinum and 13 multi-platinum albums. An artist of unparalleled accomplishments in multiple entertainment fields, Streisand has made her mark as an award winning actress of stage and screen, recording artist, concert performer, movie producer, film director, screenwriter and songwriter. Having earned two Oscars (Best Actress and Best Song), five Emmys, 11 Golden Globes, 10 Grammys including the Grammy Lifetime Achievement and Grammy Legend Awards, a special Tony Award (in 1970 as "Star of the Decade"), two Cable Ace and three Peabody awards, she is the only performer to hold honors from all of those institutions. In addition, Streisand is a recipient of the American Film Institute's Life Achievement Award, America's National Medal of Arts and France's Legion of Honor. In December 2008 she became the first female director to receive the prestigious Kennedy Center Honor. 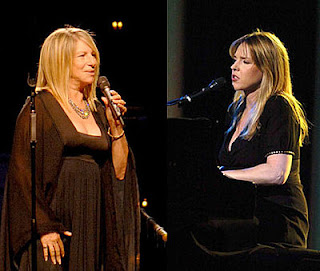