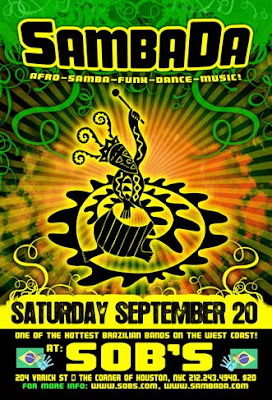 This weekend, SOB's welcomes Sambadá, a funky Brazilian fusion ensemble from the West Coast. The seven-piece collective hits hard with traveling basslines, Brazilian grooves and capoeira deomonstrations. Coming direct from Santa Cruz, CA, Sambadá is already one of the top Brazilian outfits in California. Don't miss as they make a big splash in the Big Apple!

SambaDá is one of the hottest emerging groups on the West Coast music scene; this year, SambaDá headlined the 3 most important Carnival festivals in California, in San Francisco, San Diego and Los Angeles.

Carol C of the group Si*Se will take over the night on the turntables at midnight, bringing with her a mélange of Latin, Electro and Hip-hop, and dance. "I'm from New York," Carol says, "so I try to blend all of the city’s musical traditions including hip-hop beats, Latin rhythms and down-tempo electronic,” adds Carol. “Those are the sounds that we hear every day of our lives – it’s a prelude to the future." 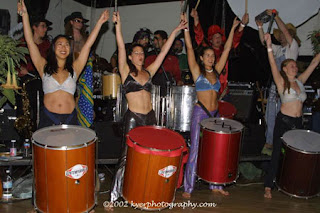 Posted by Arnaldo DeSouteiro at 12:10 PM