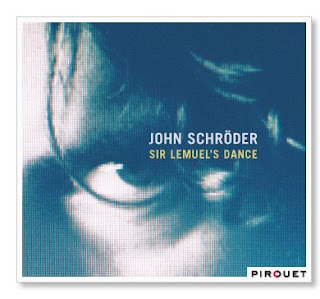 CD of the Day
John Schröder: "Sir Lemuel's Dance" (Pirouet CD PIT 3033) 2008
Official release date: October 3, 2008
Having received an advanced copy of this intriguing & exciting CD, I can easily say that "Sir Lemuel's Dance" is so far the best & most challenging album released this year by the Munich-based label Pirouet.
It's innacurate to call John Schroder "the leader".
Christian Weidner (alto sax), Oliver Potratz (bass), Oliver Steidle (drums) are the musical friends with whom he exchanges his challenging musical ideas in a fluent interplay.
However, it's more than accurate to call John Schröder a remarkable musician and composer.
For John Schröder, virtuosity is a means to an end, and that end is to deliver an enthralling musical message. The music is full of surprises and instinctive interplay. The music revolves in an extremely complex dance as Schröder challenges the band with continually modulating meters, scales, and harmonies - Schröderish dances composed of tones sparkling with deeper meaning - and Schröder's quartet communicates with penetrating intensity.
Among the top tracks are "Rieselfaktor", "Halbzeit", "Mood 1697" and "Enibas". Once in a while, Christian Weidner steals the show.
Born in Frankfurt, Germany in 1964, and recognized as a prodigy as a youth, John Schröder now lives in Berlin. For Schröder a double existence isn't enough. He leads at least a triple existence. He's a guitarist (who also plays bass). He is also a drummer. And on this newest Pirouet release, "Sir Lemuel's Dance", he concentrates exclusively on the piano. Who knows what he will come up with next! What is amazing about this jazz musician is that Schröder plays each instrument with the masterly finesse normally expected only from those who have specialized on a single instrument. It's no wonder that the list of musicians with whom John has played is so impressive: Randy Brecker, Joe Lovano, Enrico Rava for instance - and in longer projects with Roberto di Gioia and Peter Weniger, and then with Rudi Mahall and Frank Möbus in the bodacious trio "Der Rote Bereich".

Posted by Arnaldo DeSouteiro at 8:37 PM