CD of the Day
John Stein: "Encounterpoint" (Whaling City Sound CD WCS 042)
Recorded in November, 2007, in Boston, where John Stein teaches at the Berklee College of Music, this is Stein's seventh album. A great guitarist, he is joined by the veteran Boston-based South African-born bassist John Lockwood (previously heard with Art Farmer, Dizzy Gillespie and Joe Henderson, among others), newcomer Japanese keyboardist Koichi Sato (who uses the Fender Rhodes I love so much), and Brazil's drum master Zé Eduardo Nazário, by far our most creative and original drummer (ie, "the best") in Brazil's current jazz scene - actually, the most accomplished disciple of Dom Um Romão and Edison Machado, and the only one (at least to my knowledge) who seems capable to keep the flame of the "old school" of Brazilian drumming and lead it into the new millenium, by adding his own inventive mastery. In so doing, he never sounds "old"; he sounds "eternally contemporary". 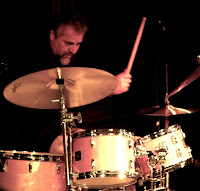 A veteran of Hermeto Pascoal's and Egberto Gismonti's best bands, Nazário shines in each and every musical context. It's not a coincidence that he recorded in some of the best albums recorded in Brazil in the 70s: Taiguara's "Imyra, Tayra, Ipy", Toninho Horta's "Terra dos Pássaros", and Egberto Gismonti's "Nó Caipira".
This new John Stein album is no exception. It starts with a seductive samba-jazz take on Duke Jordan's bop anthem "Jordu" (Nazário evokes Dom Um's soul), followed by inspired versions of "Close Your Eyes" (surprisingly played not as a ballad, but in an up-tempo "in the pocket" groove, with Sato on the Hammond organ), "You Don't Know What Love Is" (one of my personal favorite ballads), "Só Danço Samba" (great solos by Stein, Sato on Rhodes, Lockwood and Nazário), and "Dindi" (performed as a Stein-Nazário duo, with the guitarist also overdubbing on acoustic bass, using the arco on the intro, while Nazário plays multiple percussion instruments giving a "samba feeling" to Jobim's song, instead of a conventional bossa-ballad approach).
Stein himself contributes several intriguing originals such as "Line Drive" (the leader, always providing subtle lines in highly articulated phrasings, shines on this straight-ahead number), "The Roundabout" (with Sato on the B-3 and Nazário adding caxixi to his brushwork), the breezy jazz waltz "Trois" (Sato back on the Rhodes, after Lockwood's solo) and "Half-Whole Blues", which annotator Ed Hazell describes as "a wry, adventurous line, dissonant and angular, but also swinging and hip" - a tune that brings me memories of Jim Hall's "Two's Blues". Strongly recommended.
(Koichi Sato, Zé Eduardo Nazário & John Lockwood)
************
"Every jazz musician wants to grow with and through his or her art and John Stein is no exception. But jazz is elusive, and capturing that growth is a tricky process. If we're fortunate, when the studio light blinks, we end up with the very best of the music's elusive spirit preserved on disc. That is what we have here." (Ed Hazell, from the liner notes) 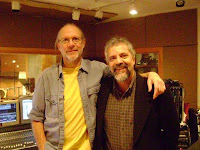