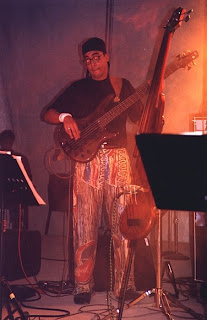 An Interview with Jorge Pescara
By Martin Simpson

Jorge sent me his resume, which was quite interesting so I sent him a reply. At my request, he gave me his birth date for our Bass Birthdays Book and a short contribution to the Why I Play Bass article so I thought “why not ask him for an interview”. Jorge complied and this is what he told me in April 2008.

- How long have you been playing Jorge?

Firstly, sorry for my "fluently wrong English". Well, I began playing bass when I was 19. It may sound "a little too late", but I've been trying to do the home lessons as fast as possible...(laughs)

- How did you get started?

I was born in a musical family. During my childhood, I was exposed to a big variety of musical styles. In my teens, I began to listen a lot to progressive rock bands. Then I began to attend many live concerts by rock and fusion jazz musicians as well, and all this mixture influenced me a lot. But what was definitive in making me wanna play the bass was when I saw Gene Simmons (Kiss) playing! It's amazing that he was not so often quoted as an influence by other bassists. I never felt any prejudice in listening and absorb influences from other bassists who were not playing exactly "my kind" of music.

It's really a difficult question, 'cause I listen to all styles... from Bach to Motorhead...plus Cocteau Twions, Joao Bosco, Elis Regina, Kiss, Kitaro, a real musical salad... (Laughs) But my personal favorites are Genesis and Yes! As a bassist, my main influences are the intoxicating grooves created by such monsters as Tony Levin, Trey Gunn, Ron Carter (did you notice how many great funky bass lines he recorded as a sideman for Creed Taylor's CTI Records when he still played electric bass in the early 70s?), Eberhard Weber, Chris Squire ("Fish Out of Water" is a landmark album!), Mick Kam, Percy Jones, Anthony Jackson (I adore his playing on Urbie Green's "The Fox" album, on which he does a very rare bass solo on a funkfied version of Stevie Wonder's "Another Star"), Armand Sabal Lecco, and Brazilian bass players like Luizao Maia (he backed Bebel Gilberto on her first solo album, "De Tarde Vendo o Mar", recorded in 1991 for the Japanese market), Sizao Machado, Celso Pixinga and Arthur Maia.

- What are the amps & instruments you currently use?

I am currently using a "made in Brazil" bass by D'Alegria custom basses (www.dalegria.com) that's begining to attract heavy attention. There are several international endorses like Trae Pierce (Blind Boys of Alabama, James Brown, Dr. Hook), Trevor Bolder (Uriah Heep), Denis Ward (Pink Cream 69) etc. They (D'Alegria) are producing a 5-string Jazz Bass under my spefications (Defender JP Model) and I'm very happy to be associated with them. Sometimes I also use an Electric Upright Bass, also made in Brazil, called DiCarmo (www.dicarmo.com) It's also an exclusive model designed for me. in 2006 I have been an endorsee of the Mobius Megastar Touchstyle instruments (www.megatar.com) This instrument is specific for the "tapping" (two-hands) technique. The model I use (ToneWeaver) is a 12-string bass with a Midi pickup for the higher notes, a mono/stereo selector key and the diagonal frets to benefit the lower strings. There are some mp3s available on the Megatar website. I plan to record an album on which I don't use electric bass, but only Megatar and other "guest instruments".
I use Elixir strings (www.elixirstrings-americalatina.com) because they are superb!
In the amplification section, my setup includes a Studio R amp (www.studior.com), Selenium speakers (www.selenium.com), PowerClick (www.powerclick.com.br) and Tmiranda custom made effects (www.tmiranda.com)

- What instruments would you like to have if money were no object?

It's a dream to have a Warr guitars Phanlax! As well as an Anthony Jackson model Fodera bass, plus an Anthony Demaria preamp, a Telefunken compressor, and a complete hardware-software recording system by KYMA.

- Have you visited the South African Bassists website www.bassplayers.co.za yet?

Yes! And it's an amazing kind of site. There's lots of interactive material to consult. I hope that someday, we, Brazilians, could be able to do something like that.

- What have you been doing for the last five years or so?

I don't like to concentrate in just one focus, so I try to act in many different projects. I've been touring and recording with singer Ithamara Koorax (acclaimed by DownBeat in 2007 as one of the Top 5 jazz singers in the current jazz scene) for the last 10 years. We did great recordings and concerts in Brazil as well as in Europe (from France to Finland!) and Asia. I also was part of the group led by the great percussionist/drummer Dom Um Romao (a former member of Weather Report from 1971 to 1974), and I took part in hislast three CDs. We also toured a lot. I wasn’t only his bassist but also a kind of stage director. I regret he passed away in 2005 when we were planning another album. I miss him a lot.

I have released, in 2005 my debut album solo, "Grooves in the Temple" (Jazz Station Records USA/Voiceprint UK) under the direction of Brazilo's top jazz producer, Arnaldo DeSouteiro, who have worked with Joao Gilberto, Dom Um Romao, Luiz Bonfa, Ithamara Koorax etc). I've also performed with such great artists as Bonfa, Deodato, Lord K, Mario Castro-Neves, Laudir de Oliveira (the famous percussionist who was a member of the Chicago group during their heyday, besides having recorded Joe Cocker's "With A Little Help From My Friends"), Claudio Zolli etc. Besides, I work as a columnist for two of Brazil's top music mags, Backstage (www.backstage.com.br) and Cover Bass (www.coverbaixo.com.br) on which I write a lot of articles about bass, stories about musicians, some CD reviews and interviews too. I have a partnership in a small studio recording in Rio de Janeiro, but I don't have much time to take care of it at close. I do a lot of workshops, sometimes I give bass lessons, I have written over a dozen books about electric bass (there's a new one coming out in May or early June). Most recently, I have also formed a fusion trio and I am completing the recording sessions of my second solo album.

- What recordings that you’ve played on would you recommend for listening?

My debut album as a leader - Grooves in the Temple (JSR/Voiceprint) - of course! Also: Ithamara Koorax's "Brazilian Butterfly" (IRMA), who got a rave 4-star review in DownBeat and was elected one of the Best CDs of 2007 by that magazine, a true jazz bible; Dom Um Romao's "Lake of Perseverance" (IRMA); and Brazil All-Stars' "Rio Strut" (JSR/Milestone Records).

- What’s been the low point in your career so far?

I really don't feel good when I see how much I still need to improve, when I notice my limits and weakness. But at the same time it leads me to study more and more. What's really depressing is the perception of how much the quality of Brazilian music has declined in the last 20 years. After a brilliant generation - Elis Regina, João Bosco, Caetano Veloso, Gilberto Gil, Milton Nascimento, Djavan, João Gilberto, Eumir Deodato Chico Buarque... and even before with Jorge Ben, Sérgio Mendes, Bola Sete, Luiz Bonfá, Antonio Carlos Jobim, the Castro-Neves Bros., the Samba-Jazz trios - we now have to listen to very bad and ridiculous groups of "pagode" (a sub-samba style), the Bahia-born "axé music" and a horrible kind of Brazilian country music called "sertanejo" that dominates the Brazilian market.

- And what has been the high point?

The decision to move from Sao Paulo to Rio de Janeiro, back in 1978, was a turning point in my career, made all the difference. It made me see people and approach my musical mission under a new vision. After moving to Rio I was able to meet Dom Um Romao, Ithamara Koorax, Mario Castro-Neves and play with them all.

- What are your goals currently?

Keep studying and improving more and more, try to create new bass techniques, "reinvent" some styles...surprise myself! My evolution as a human being is the essential part of the whole process, in search of a better world, more fair and noble. Peace!
Posted by Arnaldo DeSouteiro at 6:26 PM