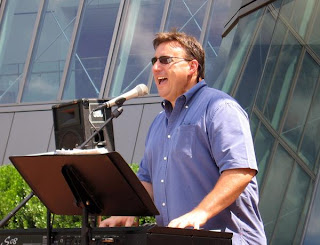 The Dimock Center’s Steppin’ Out With The Stars Talent Showcase has just chosen BILL CHAMPITTO as the winner of this year’s talent competition, held this evening at Scullers Jazz Club.

“This year, all of the entrants were very high in quality,” noted Ruth Ellen Fitch, President and CEO of The Dimock Center. “We had noted musicians and media professionals on our panel of judges, and all of them were very impressed with the talented musicians who performed in the showcase.”
*********
Bill Champitto is a Boston-based singer, songwriter, pianist, synthesist and Hammond organist. His first love is live performances but he has extensive studio experience as well. He started playing rock and blues on the Hammond B3 organ and his first working gig was with a 9-piece bar band that played the waterfront in Troy, New York. In this group, he covered everything from Chicago to Earth, Wind and Fire, to the Ohio Players and jam bands like The Allman Brothers, Santana and Tower of Power.

A few bands later, Bill found himself on the road with various club and small venue acts. Being self-taught, Bill picked up everything he could from the wide variety of the players he toured with, learning jazz fusion from a sax player he worked with from the mid-west, jazz standards from a guitarist from New York, reggae from a bassist from the West Indies, southern rock and blues from another bassist who was a retired marine from Georgia, alternative rock from a drummer and a singer he met in upstate New York and Latin styles like salsa from a drummer who seemed to not have a home.

The other three finalists were pianist Manami Morita, jazz vocalist Gabriela Heer and jazz/R&B/funk/rock/pop group Blaque Lyte. These talented artists all competed this evening at Scullers Jazz Club in the DoubleTree Guest Suites Hotel. The event was hosted by NECN personality Latoyia Edwards.

The showcase winner receives $500.00 and the opportunity to perform at Steppin’ Out on November 8 at the Westin Boston Waterfront Hotel alongside stars like Lalah Hathaway, Amel Larrieux, Monty Alexander, Esperanza Spalding and many others.

Thank you for the mention in your blog. It was an honor just to be included among that group of finalists. At the show I performed "A Better Way" as a tribute to the Dimock Center for the work they do that makes the world a better place. I want to thank my band, Keith Kirkpatrick on Bass and Keita Ogawa on percussion for their outstanding professionalism.

We are looking forward to an incredible show at Steppin' Out with the Stars. Other shows and information about the band and our music can be found at billchampitto.comor on MySpace.