"Upojenie", an album that guitar wiz Pat Metheny did six years ago with Polish songstress nymph Anna Maria Jopek was previously only available in Poland. This new CD version, which includes three previously unreleased tracks, will be now available world-wide, released by Nonesuch Records on October 7, 2008.
Tracklist:
1. Cichyzapada Zmrok (Here Comes The Ilent Dusk)
2. Mania Mienia
3. Biel (Whiteness)
4. Przyplyw, Odplyw, Oddech Czasu...(Tell Her You Saw Me)
5. Are You Going With Me?
6. Czarne Slowa (Black Words)
7. Lulajze Jezuniu (Polish Christmas Arol)
8. Upojenie (Ecstasy)
9. Zupelnie Inna Ja (Always And Forever)
10. Piosenka Dla Stasia
11. Letter From Home
12. Me Jedyne Niebo (Another Life)
13. By On Byl Tu (Farmer's Trust)
14. Polskie Drogi (Polish Paths)
15. Tam, Gdzie Nie Siega Wzrok (Follow Me)
16. Na Calej Polaci Snieg (The Snow Falls All Over The Place)
17. Szepty I Lzy (Whispers And Tears)
Pat Metheny wished this album to have world premiere with his "One Quiet Night". Five years ago some legal problems with contracts didn't allow to it. But it was worth waiting! "Upojenie" is going to be released in October by Robert Hurwitz's Nonesuch label as a Pat Metheny & Anna Maria Jopek album! It is extraordinary distinction. Up to now only Charlie Haden, Jim Hall and Brad Mehldau have had the opportunity to occur on Pat Metheny's album covers, linked with the mark "&"!

International edition of "Upojenie" includes lyrics translated into English by Marcin Kydryński and Pat Metheny, short Pat's, AMJ's and Marcin's texts, and what is the most important - three not released songs (two of them from a memorable concert in Congress Hall). Also the track sequence is different, as suggested five years ago by producer Matt Pierson. This edition of "Upojenie" is priceless treasure for collectors. But perhaps the most priceless will be the first Polish edition, which may soon disappear from the market...
"Anna is original, unique, different. She's brave, she's modest, she's open. She's a great musician. What she's been doing all her life is just trying to play the best notes. Trying to sound good. In that particular sense she's a lot like me and that's why I decided to work with her - because she just cares for the music." - Pat Metheny on Anna Maria Jopek 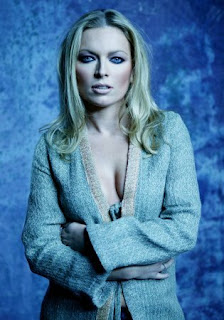 "I couldn't think of anything more inspiring, motivating and ear opening than working with Pat Metheny. He's been my first and most important mentor for years, but to actually make music with him was the most thrilling experience in my life..." - Anna Maria Jopek commented on their project.

The Universal recording artist is a classically trained pianist and graduated from Chopin's Academy of Music in Warsaw, Poland. After briefly studying in Manhattan School of Music's Jazz Department Anna decided not to play Mozart concertos anymore and trade her beloved Ravel for Keith Jarrett. Philharmonic Hall for a small, smoky clubs and theatres.

I embrace a lot of influences. Jazz is by far the most important in its freedom, its harmony and its sense of time, but I was brought up with the old Polish folk songs. So I'm kind of rooted here in all these Slavic landscapes and sounds".

With 10 albums of her own Anna Maria Jopek performed and recorded with all the important artists in Poland including numerous concerts and recordings with an ECM-based trumpeter Tomasz Stako. During the Jazz Jamboree International Festival 40th Anniversary Gala in 1998 she performed with the one of the greatest jazz musicians of our time: Joe Lovano. In 2003 at the Presidential Palace in Warsaw, invited by the First Family Anna gave a small recital broadcasted live and dueted with the pop icon, former King Crimson frontman, Gordon Haskell.

Although she plays open air gigs for 5,000 fans, as happened in Warsaw in June 2001 and 8,000 in Augustów in July 2003, Anna prefers an intimate setting to a huge concert hall and performs about 100 concerts each year, from Toronto to Vienna, London to Berlin. Yet her Carnegie Hall appearance on January 4, 2004, remains one of the most cherished and memorable thrills of her professional life.

Yes, she has been given awards, including Michel Legrand's Personal Award in Witebsk in 1994, not to mention literally all of the Polish prestigious awards and Gold and Platinum records. Nevertheless Anna Maria Jopek is known for saying: "Music itself is the highest award for me. And the greatest challenge. With so many questions remaining to be answered".
Posted by Arnaldo DeSouteiro at 10:21 PM