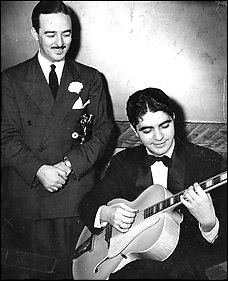 The guitarist and bandleader Frankie Tam (pictured above with Bobby Hackett) died August 19th in Washington, D.C. at the age of 93. At the age of 5 he received first violin lessons, but switched to guitar during the 1920s and in the 1930s replaced Eddie Condon in the band trumpeter Bobby Hackett led at the New York club Nick's. Since 1940 he lived and worked in Washington, D.C., led his own big band and since the 1960s also taught acoustic and later electric guitar. Obituary: Washington Post
Posted by Arnaldo DeSouteiro at 6:51 AM