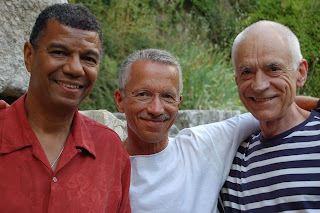 Keith Jarrett, Gary Peacock, Jack DeJohnette are touring as a part of celebrating the trio’s 25th anniversary and the reissue of two out-of-print concert DVDs. On August 26, ECM will re-release Standards I and II, which were previously available as separate VHS and DVDs, in a single package. The shows were taped in Tokyo in February 1985 and October 1986. The 1985 gig leans toward the softer side of the trio on songs such as "Stella by Starlight" and "God Bless the Child," while the 1986 show is an all-standards set featuring tracks like "Georgia on My Mind," "When You Wish Upon a Star" and "On Green Dolphin Street."

The trio's first three ECM Records releases were Standards Vol. 1 and 2, and Changes. These recordings from the original New York trio session were re-released by ECM as a special 3-CD box set in January this year also in celebration of the trio’s 25th Anniversary. It includes all new liner notes, plus a gallery of trio photos taken over the past 25 years.

They came together as a permanent trio in January 1983, when Jarrett invited the other two to join him in New York for a recording session dedicated to playing "standards" - the rich body of American popular songs from the 1930s, '40s and '50s. At the time it was considered passé for top players to concentrate on playing standards, instead of original material, but Keith Jarrett thought it was important to show that "music wasn't about material, but what the player brings to the material."

In the past 25 years, the trio has been nominated for many international awards, including five American Grammy® nominations, plus dozens of Record of the Year and Critics’ awards from the U.S., European and Japanese music press, including the Gold Disc Award in 2000 and 2003 from Japan’s Swing Journal and the Choc des Chocs Award in 2000, 2001 and 2003 from France’s Jazzman Magazine for "Best Jazz Album of the Year.” In 1991, their Tribute recording was awarded the "Prix du President de la Republique" from the Charles Cros Academy, France's award for the "Best Recording of The Year.” In 1998 and 1999 the trio was voted "Best Acoustic Jazz Group" in the Downbeat Reader's Polls, and again this year, in the Downbeat Critic’s Poll.

Over the past 40 plus years, Keith Jarrett has come to be recognized as one of the most creative and uncompromising musicians of our times--universally acclaimed as an improviser of unsurpassed genius, a master of jazz piano and a classical pianist of great depth. As a composer who has written hundreds of pieces for his various jazz groups, he has also composed extended works for orchestra, soloist and chamber ensemble.

Born in May 1945 in Allentown, Pennsylvania, he began playing piano at age 3 and classical studies at age 7, then undertook formal composition studies at age 15. In the early 1960s, while still a teenager, he began playing jazz, and was soon touring with Art Blakey, then for three years with Charles Lloyd, finally joining Miles Davis. By the late 1960s, he was leading his own trio with bassist Charlie Haden and drummer Paul Motian (soon to be a quartet with saxophonist Dewey Redman) and recording as a leader for Atlantic, Columbia and Impulse Records.

In 1971, he began an exclusive recording collaboration with ECM Records, the visionary German label headed by producer Manfred Eicher. This collaboration has produced a catalogue of nearly 60 recordings to date, unparalleled in their diversity and scope, including 17 trio recordings (on 26 CDs) with Peacock and DeJohnette; nine classical recordings of music by Bach, Handel, Mozart, and Shostakovich; and Jarrett's groundbreaking solo piano recordings such as Köln Concert and La Scala, which have helped to redefine the piano in contemporary music. His most recent solo releases include Radiance featuring improvised solo performances recorded live in concert in Japan in 2002 and The Carnegie Hall Concert, recorded in New York in 2005.

Gary Peacock has served as an inspiration for several generations of jazz bass players, not being content with the traditional bassist's role of simple time-keeping and harmonic accompaniment. His ability to bring melodic and rhythmic freedom into any musical setting has been his trademark in jazz for 45 years.

Born in 1935 in Idaho, Peacock first played in Los Angeles in the late 1950s with Bud Shank, Barney Kessel, Hampton Hawes, and Paul Bley. By the early 1960s, he was in New York playing with Bill Evans, Miles Davis, Albert Ayler, Archie Shepp, Sonny Rollins and others. He moved to Japan for several years in the late ‘60s to study Oriental philosophy and medicine, before returning to the U.S. in the early 1970s to resume active music-making and to teach at the Cornish Institute in Seattle. Over the years he has also worked with Sarah Vaughn, Chick Corea, Joe Henderson, Helen Merrill, Michel Petrucciani, Don Pullen, Bill Frisell and Ralph Towner to name a few.

In 1968, DeJohnette joined Miles Davis’s group in time for the epochal upheaval marked by Bitches Brew, an album that changed the direction of jazz. In his autobiography, Miles said, “Jack DeJohnette gave me the deep groove that I just loved to play over.” DeJohnette has garnered many awards including France's prestigious "Grand Prix du Disque" in 1979, "Album of the Year" awards in the 1984 Downbeat Readers’ Poll and the 1989 Critics’ Poll and Japan’s Swing Journal. He has the distinction of having been voted "Best Drummer" in the Downbeat Readers’ Polls for an unprecedented 13 straight years from 1980 to 1992, as well as several additional times in recent years. In 1991, Boston's Berklee College of Music awarded him an Honorary Doctorate of Music. In 1997, he appeared on the Grammy® Awards telecast with Herbie Hancock, Wayne Shorter and Natalie Cole in a tribute to Ella Fitzgerald and was also a featured musician in the film, Blues Brothers 2000.
Posted by Arnaldo DeSouteiro at 2:29 PM