In the top of the HMV jazz chart in Japan this week, Ron Carter's "Jazz & Bossa" (released by Toshiba on June 25 in Japan) is a totally Brazilian-oriented date that celebrates not only the 50th anniversary of the bossa nova as well as the longtime association of the bassist with Brazilian music, which began when he took part on albums by Luiz Bonfá and Antonio Carlos Jobim (most notably, "Wave") in the mid-60s. Here, Ron Carter performs new versions of the bossa anthems "Chega de Saudade" and "Wave", plus remakes of his own tunes "Ah, Rio" (previously recorded for Milestone on "Patrão" with Edson Machado on drums!) and "De Samba" (originally from the Kudu album "Anything Goes").
Oddly, Romero Lubambo is miscredited as co-composer of the opening track, Milton Nascimento's "Salt Song", which Carter had recorded as a sideman with Stanley Turrentine for CTI. Ron Carter is backed by my soul brother Portinho (drums), Stephen Scott (acoustic piano), Javon Jackson (tenor sax), Guilherme Monteiro (acoustic guitar) and Rolando Morales-Matos (percussion).
Eliane Elias' "Bossa Nova Stories" (released on May 28 by EMI/Toshiba's subsidiary label Somethin' Else) includes "Minha Saudade", "A Rã", "Falsa Baiana", "Desafinado", "Chega de Saudade", "Girl from Ipanema" plus the standards "Too Marvelous For Words" (also recorded by Diana Krall for her upcoming album with Claus Ogerman on Verve), "Day by Day", "Estate", "The More I See You", "They Can't Take That Away From Me", "Superwoman" and "Day In Day Out". 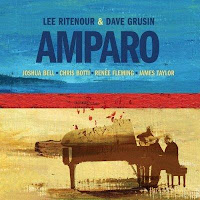 Last but not least, the title track of the new Lee Ritenour & Dave Grusin collaboration (to be released in Japan on August 27 by Decca), is Antonio Carlos Jobim's "Amparo", originally composed for "The Adventurers" soundtrack in 1969. But it became famous all over the world when Jobim re-recorded it on the legendary CTI album, "Stone Flower", in 1970.
Posted by Arnaldo DeSouteiro at 12:08 PM