DVD of the Day - "Larry Coryell: A Retrospective" 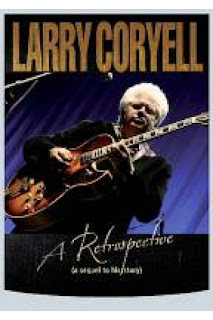 DVD of the Day
Larry Coryell: "A Retrospective" (In-Akustik) 2007

This show was filmed by director Daniel E. Meza (who also signs the excellent liner notes) at The Avalon in Hollywood, California on October 13, 2005 to celebrate the prolific career of guitar legend Larry Coryell. It's a two disc retrospective on a career's worth of songs that are every bit as electrifying now as when they were first recorded.
Coryell is a monster on guitar throughout the show, surrounded by Bernard Pretty Purdie (a legend in his own right) on drums and bassist John Hart (not to be mistaken with the namesake guitarist). Special guests James Valentine (Maroon 5) and David Hidalgo (Los Lobos) drop by to show off their talents in homage to Coryell, with whom I had the honor to record when producing the album "Almost in Love - Ithamara Koorax Sings The Luiz Bonfá Songbook".
Through some short interviews and segments of rehearsal footage we can see how the music is created, sometimes also with the help of Larry's talented son, Julian Coryell, who plays the original guitar parts recorded by John McLaughlin when Coryell recreates the title track from his acclaimed 1970 album "Spaces".
Posted by Arnaldo DeSouteiro at 12:29 PM