CD of the Day - "Delta Saxophone Quartet: Dedicated to You" 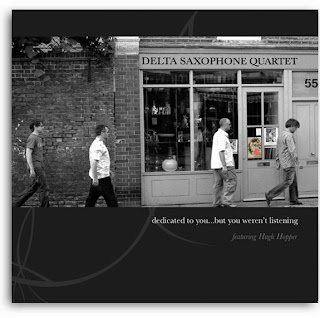 CD of the Day
Delta Saxophone Quartet: "Dedicated to You... But You Weren't Listening - The Music of Soft Machine" (MoonJune) 2008

The Delta Saxophone Quartet was formed in 1984 and is ithe Ensemble in residence 2003-2008 at Kingston University, London, UK. The group aims to present British and international new music in a dynamic and thought provoking way. A sample of its repertoire may include works by Gavin Bryars, Philip Glass, Steve Reich, Louis Andriessen or jazz composer Mike Westbrook to re-workings from the legendary 70's Jazz/Rock grouhe Soft Machine.
For more detailed information about the band visit Music On The Edge
Posted by Arnaldo DeSouteiro at 5:36 AM