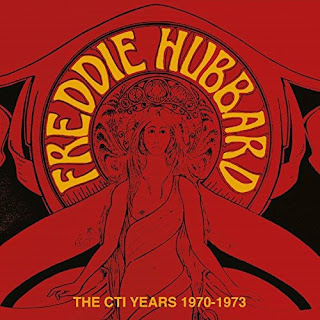 When top jazz trumpeter Freddie Hubbard began recording for the CTI label in the early 1970s, he combined his mastery of bop with forays into fusion and imaginative interpretations of contemporary pop and soul hits, reaching his creative heyday. Something that led him to replace Miles Davis as #1 Trumpeter in the DownBeat polls!

This album looks like a compilation of his CTI studio recordings, but it is not. With more than two hours of music, this unofficial two-CD release showcases Hubbard at the head of several lineups at four different concerts recorded during the period he was signed to Creed Taylor's label. They were broadcasted on different radio stations, and feature Hubbard performing songs from his popular albums "Red Clay," "Street Life," "Polar AC" and the Grammy winning "First Light."

There are incredible performances at Rutgers University 1970, The Jazz Workshop 1972 & 73 and Ebbet’s Field 1973, from broadcasts on WRSU, WBCN and KCUV FM radio stations. All tracks digitally remastered for greatly enhanced sound quality.

Disc 1 includes three tracks from a performance at Rutgers University in the Spring of 1970 with Cedar Walton (piano), Wayne Dockery (bass), Louis Hayes (drums) and Junior Cook (tenor sax), opening with Walton's "Ugetsu," originally recorded by Hubbard in 1963 as a member of Art Blakey's Jazz Messengers and later retitled "Polar AC" for a CTI album of out-takes released in 1974, although the tune is currently known as "Fantasy In D" (wow!) It's followed by Hubbard's signature theme and contemporary jazz standard "Red Clay" (featuring a long solo by Wayne Dockery, who would later move to George Benson's band at the time of that live album for CTI "In Concert - Carnegie Hall") and a short outro titled "Calypso Fred."

The title track from Hubbard's Grammy-winning album "First Light" (his third session as a leader for CTI) comes from a gig at Boston's The Jazz Workshop on September 26, 1972, and it sounds much wilder than the studio version. And longer! Nothing less than 22 minutes of pure dynamite. Then comes the hard-bop "The Intrepid Fox," originally heard on "Red Clay" and including an extraordinary solo by drummer Lenny White. George Cables (Fender Rhodes), Mickey Bass (on acoustic bass) and Junior Cook (flute & tenor sax) complete the band.

Disc 2 opens with the same group groovin' on Weldon Irvine's "Mr. Clean," recorded by Hubbard on his second CTI date, "Straight Life." It's an amazing lesson in back beats and drum breaks. It's also worth to mention that the latest project by the CTI All Stars, "Live at Montreux 2009," released on Blu-ray, DVD and CD formats in Japan, is dedicated by Creed Taylor to Freddie Hubbard and opens with a killer version of "Mr. Clean" featuring Randy Brecker, Hubert Laws, Mark Egan, Airto et al.

There's one track from another Jazz Workshop broadcast on October 9, 1973: "Betcha By Golly Wow," that had been a big pop-soul hit for The Stylistics the previous year. Hubbard had recorded the beautiful Tom Bell-Linda Creed song also in 1972, with an arrangement by Bob James, but it only came out in 1975 on the "Polar AC" album; the same year he recorded it once again (in a lovely flugelhorn/Fender Rhodes duet with George Cables), during a Japanese tour, for the 2-LP set "Gleam" issued by CBS. Cables also was the pianist on the '73 Boston gig, and Hubbard used flugel, but that time he played the melody very slowly, like Shirley Horn would do it, with very subtle backing by bassist Kent Brinkley and drummer Ralph Penland. However, it's the only track with a very bad sound quality.

Cables, Brinkley, Penland and Junior Cook were the members of Hubbard's touring band when he featured them all on his fifth CTI studio album, "Keep Your Soul Together," which includes the hard-bop tune "Spirits Of Trane" played at Ebbet's Field in Denver, CO, on October 30, 1973. Penland plays his ass off in a fiery solo.

The last track, from that same concert, Paul McCartney's "Uncle Albert/Admiral Halsey" was recorded by Hubbard in 1971 on the "First Light" album at the suggestion of arranger Don Sebesky. This '73 live version starts with a delightful bossa nova beat but suddenly moves into an impressive and strong jazz-rock piece, including stratospheric solos by the leader, Cables and Cook.