Beyond CD of the Month - "Machine Mass Plays Hendrix" 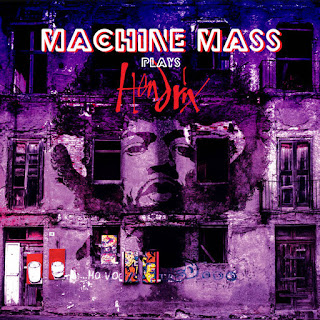 All music by Jimi Hendrix and arranged by Machine Mass
All tracks recorded live in the studio on March 18, 2016 @ Studio5 (Liège, Belgium) by Maxine Wathieu with no overdubs and minimal editing
Mixed & Mastered by Jon Wilkinson
The songs are presented on CD in the sequence in which they were recorded

Probably the best tribute to Hendrix since the legendary "The Gil Evans Orchestra Plays The Music of Jimi Hendrix" released by RCA back in 1974. The program includes such classics as "Third Stone From The Sun," "Purple Haze," "Little Wing" (which Gil also arranged in 1987 for Sting's "Nothing Like The Sun"), "Fire" (recorded by Urszula Dudziak on her fantastic CTI album "High Horse"), "Voodoo Chile" (one of the highlights from Gil's 1974 LP) and "The Wind Cries Mary" (covered by Donald Harrison on his CTI solo session "The Power Of Cool"), among other gems. All brilliantly re-arranged in a highly creative way by the Machine Mass wild virtuosi.

Augmented by the addition of the otherworldly talents of young maestro keyboardist, Antoine Guenet (The Wrong Object; Sh.TG.N; Univers Zero), fellow sonic adventurers -- and Machine Mass founders -- guitarist Michel Delville (The Wrong Object; douBt; Alex Maguire Sextet) and drummer Anthony Bianco (douBt; Elton Dean; Dave Liebman) combine forces to steam through a set which provides a refreshing retake of some of the most influential psychedelic rock classics from the '60's that changed the face of music!

While the songs reference frameworks familiar to most classic rock aficionados, the comparisons end there: the trio follows flight plans which are uniquely their own, achieving moments stunningly fresh, instinctive, profound and moving. The addition of piano and keyboards to the tracks provides a welcome approach, imploring reharmonizations as well as complete revisions many hipsters, both young and old, will revel in.

In typical Machine Mass fashion, the music thumbs its nose at convention and is unapologetically uninhibited in its delivery. The group pushes boundaries on all front, producing a record that is as fascinating from a tonal / textural perspective as it is from the 'harmonic rethink' and the mass of corporate liberties taken within the song structures, respectively.

Machine Mass' "Plays Hendrix" is an engrossing, brilliantly conceived retake on some of rock's most adventurous classic moments; a quintessential album for fans of rock, psychedelic and progressive, alike.
Posted by Arnaldo DeSouteiro at 9:11 PM