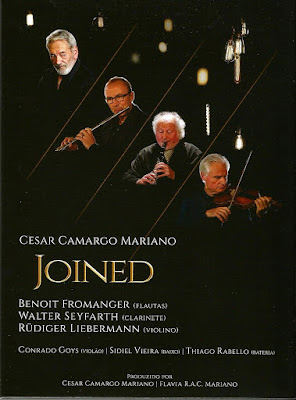 A masterpiece conceived & performed by a living legend of Brazilian music, Cesar Camargo Mariano, with the impeccable contributions of six great musicians: three São Paulo-based players in the rhythm section + three European classical virtuosi that became friends with Mariano during concerts at the famous "Música Em Trancoso" Festival. A flawless crossover project in all aspects, co-produced by Cesar's wife, Flavia R.A.C. Mariano, with an astounding level of musical and visual refinement.

I have been a huge fan of Mariano's multi-faceted talents since my childhood, when I discovered and started to collect everything he recorded: from the early days of Sambalanço Trio and the Octeto de Cesar Camargo Mariano to Som Três, the impressive body of work with Marisa, Raul de Souza, Wilson Simonal and specially Elis Regina (including the landmark collaboration with Antonio Carlos Jobim on "Elis & Tom"), his phenomenal solo efforts, the duos with Helio Delmiro (on the groundbreaking "Samambaia" album), Nana Caymmi, Nelson Ayres, Wagner Tiso, Romero Lubambo and Pedro Mariano, till projects with "classical pop star" Yo-Yo Ma and jazz songstress Blossom Dearie on her final recording session.

It's also worth to mention that I was blessed to attend many of his concerts: not only with Elis (from "Elis & Tom" at Teatro do Hotel Nacional to the opening night of "Saudade do Brasil" at Canecão), but also as a leader, including a funkyfied performance with the Placa Luminosa band at the Adolfo Bloch Theater, and the electrifying duo with Wagner Tiso at the Sala Cecilia Meirelles. We also met in 1996 during the recording & filming of the all-star project Casa da Bossa, released by PolyGram all over the world and broadcasted in Brazil on Muiltishow TV channel, on which Mariano performed with Ithamara Koorax, Os Cariocas, Johnny Alf and many other artists.

This year I had the privilege to interview Mariano for the "LA + Rio" documentary movie for which I wrote the screenplay. And remembered him the big coincidence that we started our TV shows at the now-defunct Rede Manchete TV network in the same week of the same year, 1985, when I was thrilled to watch an amazing program filmed in LA for TV Cultura during the sessions for his 1983 album "A Todas As Amizades" with Abe Laboriel, Paulinho da Costa etc.

Besides the fact that, throughout my career as a producer, I have included several Mariano's tracks such as "Amor Em Paz" and "Futebol de Bar" on compilations I produced for several labels, most notably the best-selling "A Trip To Brazil Vol.5" for Verve.

This new brilliant DVD includes 12 gorgeous tracks and an amazing "making of" which includes an essential interview with Cesar (the other musicians also talk about the project, but in more subjective ways.)

Works by Hermeto Pascoal ("Bebê," certainly his most famous song), Ary Barroso ("Na Batucada da Vida"), Garoto ("Gente Humilde") and Waldir Azevedo (maybe the most beautiful version ever of "Carioquinha") are also included on the program. Essential. And already one of the best releases of the year. 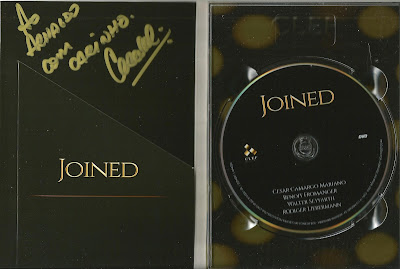 Posted by Arnaldo DeSouteiro at 9:11 PM