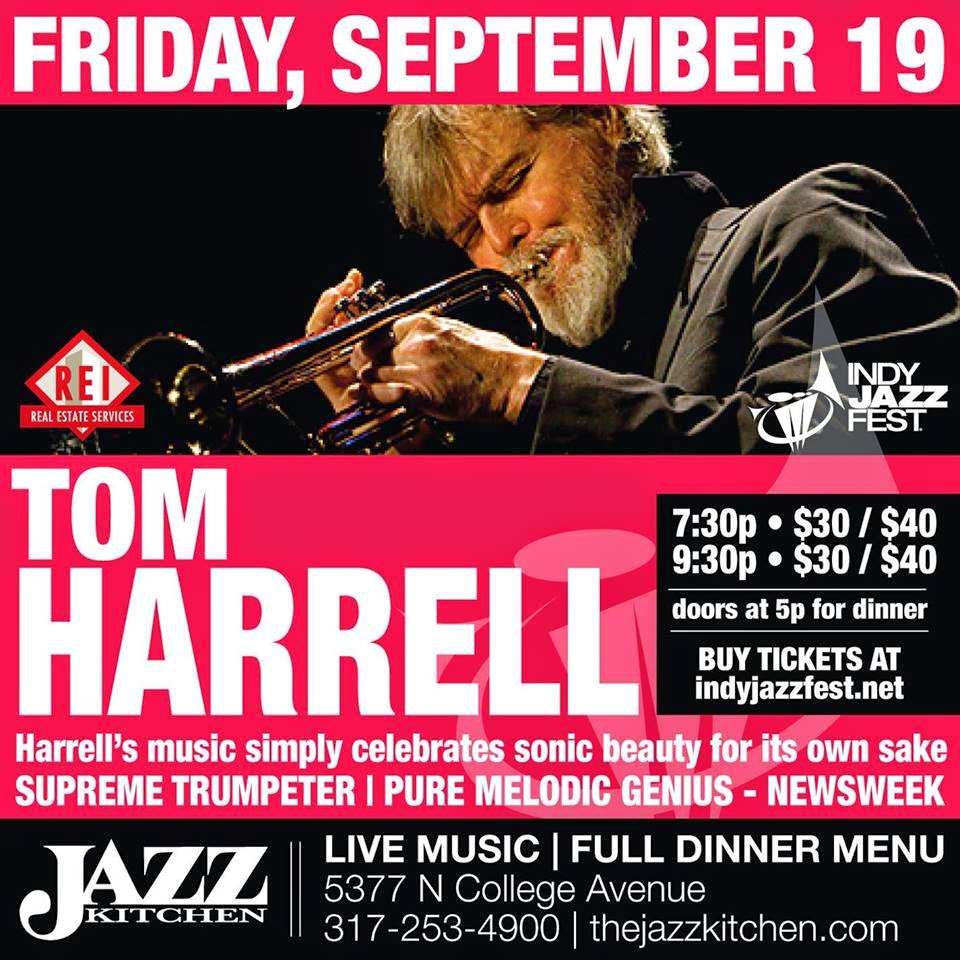 What are you doing on September 19th?
Trumpet and flugelhorn master Tom Harrell will be playing @ Jazz Kitchen in Indianapolis with Ugonna Okegwo, Luis Perdomo and Johnathan Blake.
Bonus: There is going to be a free master class on 9/20!

Praised by Newsweek for his pure melodic genius, Tom Harrell is widely recognized as one of the most creative and dynamic jazz instrumentalists and composers of our time. While Harrell is a master of the jazz idiom, he constantly seeks new challenges and influences. Even with a discography of over 260 recordings and a career that spans more than four decades, Harrell has managed to stay fresh and current as he continues to actively record and tour around the world.

He is a frequent winner in Down Beat and Jazz Times magazines’ Critics and Readers Polls and a Grammy nominee. Harrell is also a Trumpeter of the Year nominee for the 2012 Jazz Journalists Association Awards. His warm, burnished sound on the trumpet and the flugelhorn, and the unparalleled harmonic and rhythmic sophistication in his playing and writing, have earned Harrell his place as a jazz icon to aspiring musicians and devoted fans alike. His music is at once intelligent, soulful, fresh and accessible.

In contrast to Harrell’s tenure as an RCA/BMG recording artist (1996–2003) when much of his focus was on projects involving large ensembles, Harrell’s last five albums were made with the current members of his quintet: Wayne Escoffery on tenor sax, Danny Grissett on piano and Fender Rhodes, Ugonna Okegwo on bass and Johnathan Blake on drums. Each of these albums – NUMBER FIVE (2012), THE TIME OF THE SUN (2011), ROMAN NIGHTS (2010), PRANA DANCE (2009) and LIGHT ON (2007) – has received wide critical acclaim and won SESAC awards five years in a row for topping the US radio charts. The writing on these five releases is no less of an achievement than his work for the symphony or the big band. The trumpeter-composer deftly weaves complex harmonies together with daring rhythmic concepts and unforgettable melodies while utilizing the available colors to full effect.

In the last two years, Harrell has begun to develop new projects, often involving some or all of the quintet members. In June of 2011 he premiered his own arrangements of works by Debussy and Ravel with the nine-piece Tom Harrell Chamber Ensemble. Since then the ensemble was featured on PBS’ Soundtracks and toured in the US. The TRIP quartet is a piano-less group that was formed last year after Harrell was commissioned to write new music by Dave Douglas for the Festival of New Trumpet Music. The group comprises tenor saxophonist Mark Turner, Harrell’s long-time bassist Ugonna Okegwo and drummer Adam Cruz, and will reconvene during one of Harrell’s two-week run at the Village Vanguard in October. COLORS OF A DREAM, Harrell’s latest creation, will also perform at the Village Vanguard in late March; Harrell takes the piano-less concept one step further with this sextet featuring alto saxophonist Jaleel Shaw, bassist-vocalist Esperanza Spalding and quintet members Wayne Escoffery, Ugonna Okegwo and Johnthan Bkake.

A graduate of Stanford University with a degree in music composition, Harrell is a prolific composer and arranger. Carlos Santana, Cold Blood, Azteca, Vince Guaraldi, Hank Jones, Kenny Barron, the Vanguard Jazz Orchestra, Danish Radio Big Band, WDR Big Band, Brussels Jazz Orchestra, Metropole Orchestra and Arturo O’Farrill & the Afro-Latin Jazz Orchestra are among the many who have recorded or performed his work. Harrell’s composition and arrangement, “Humility,” was recorded for the latter’s 2008 release, which just won a Grammy for the Best Latin Jazz Album.

Some of Harrell’s notable RCA/BMG recordings include WISE CHILDREN, a project in which he combines woodwinds, brass, horns, strings, guitars, percussion and the vocals of Cassandra Wilson, Dianne Reeves, Jane Monheit and Claudia Acuna; PARADISE and THE ART OF RHYTHM, both of which feature chamber groups with strings; and his Grammy-nominated big band album, TIME’S MIRROR.
Posted by Arnaldo DeSouteiro at 6:03 AM