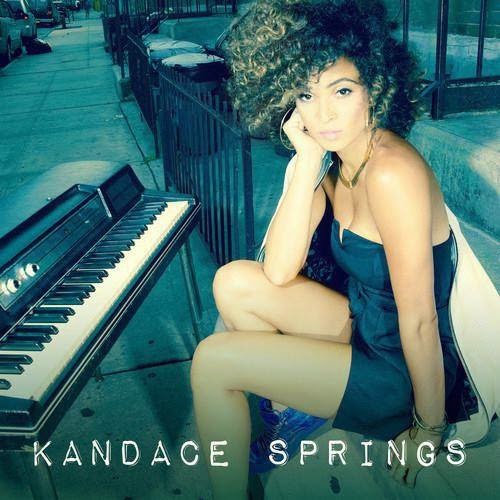 Don't sleep on Kandace Springs! Her self-titled debut EP for Blue Note Records is out now!

Blue Note Records has signed Kandace Springs and will release her self-titled debut EP on September 30 together with SRP Music Group. Springs will perform the EP’s first single, “Love Got In The Way,” when she makes her national television debut on “Late Show with David Letterman” on Friday, October 3. The official video for “Love Got In The Way” premiered on Afropunk.com and can be viewed HERE.

Born and raised in Nashville, Kandace was only 17 when she captured the attention of SRP Music Group’s Evan Rogers and Carl Sturken with a demo she had recorded. Springs moved to New York City several years later to begin working on new songs with Rogers and Sturken, who have written hits for such artists as Shakira, Christina Aguilera and Kelly Clarkson, and are best known for discovering a teenage Rihanna. A&R executive Eli Wolf brought Springs to Blue Note Records, where she auditioned for label president Don Was with a performance of “I Can’t Make You Love Me” — a bold move, since Was produced Bonnie Raitt’s original recording. Was signed Kandace on the spot.

The pre-order for the Kandace Springs EP, which offers a first taste of her forthcoming full-length album, launched today on iTunes. See below for track listing. She will perform at an exclusive EP release show at The Box in New York City on September 30, with a limited number of tickets available to Kandace’s fans to be given out on her Facebook page. In October, Springs will open for Chance The Rapper on two East Coast dates of the fall 2014 Verge Campus tour. See below for itinerary.

Drawing on R&B, hip-hop, jazz, pop, and Latin music, Springs’ four-song EP showcases her knack for merging old-school values with fresh and innovative styles. Kandace co-wrote the first single, “Love Got In The Way,” and the sultry “Forbidden Fruit,” with Sturken and Rogers, who produced the tracks along with Eli Wolf. “West Coast” and “Meet Me In The Sky” were produced by Philadelphia and Los Angeles-based team Pop & Oak (Nicki Minaj, Drake, Alicia Keys), who co-wrote these songs with Springs.

Hailed as an Essence “New & Next” artist, Springs talks about her music and performs “Forbidden Fruit,” accompanying herself on her Fender Rhodes keyboard, in this exclusive clip. The Wall Street Journal hailed Springs as a “suave songstress” and Entertainment Weekly praised “West Coast” as “buoyant neosoul that combines a rollicking horn arrangement and a bumping rap beat.” “The 23-year-old manages to carry out her mission statement of bridging classic soul with hip-hop by syncing her nostalgic vocals with record scratches and underground beats,” said RyanSeacrest.com while GlobalGrind.com noted in a recent live review, “Kandace Springs set a calming environment with her soulful voice… audience members couldn’t get enough and begged her for another song.” Early fans have also included Prince, who invited Springs to come perform at his legendary Paisley Park Studio in Minneapolis after seeing one of her YouTube videos.
Posted by Arnaldo DeSouteiro at 10:55 PM