Blu-ray of the Month - "Wayne Shorter: The Language of the Unknown" 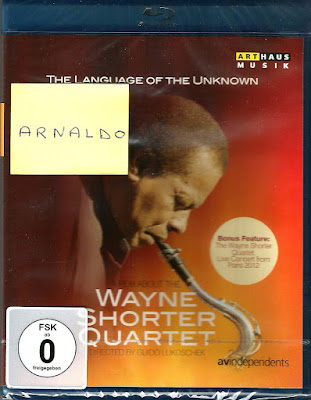 Blu-ray of the Month
Wayne Shorter Quartet: "The Language of the Unknown" (ArtHaus Musik) 2014

Absolutely stunning! The 1-hour documentary film is "the main attraction." But the "bonus feature", a complete 93-minute concert filmed at Salle Pleyel, in Paris, on November 2012 is equally sublime and important. I've watched this DVD already three times and still can't live without any of their halfs. The official audio language is English, but there are subtitles in French, German and Japanese. It's a copy-protected Blu-ray Disc, with 25GB, 1080i High Definition, PCM Stereo sound, 16:9 Picture Format, and free for all regions.

I've been a Wayne Shorter fan since my childhood, had the honor and blessing to meet him in the mid-70s. Firstly in Los Angeles, later in my native Rio de Janeiro when he and his Portuguese then-wife Ana Maria Shorter went there to start Wayne's album with Elis Regina (that was never completed, unfortunately) as well as for a Weather Report performance (with Zawinul, Jaco Pastorius, Peter Erskine, Bob Thomas) in August 1980 at the Rio/Monterey Jazz Festival. [Weather Report had performed in Rio for the first time in 1974, with my late friend Dom Um Romão on percussion.] Later, I had the opportunity to attend other WR and Wayne's concerts in Montreux, both as a leader of his own ensemble (with another keybaord genius, Jim Beard) and as a member of an all-star quintet that recreated Miles Davis' quintet with Wallace Roney on trumpet.

Well, now we have this new superb Blu-ray. "The Language of the Unknown" enters to the universe of one of the last living legends of jazz; and its main philosopher. Wayne Shorter's maxim is to reinvent his music in each concert, always with radical originality. After his legendary work with the Art Blakey’s Jazz Messengers, the second great Miles Davis Quintet (with Herbie Hancock, Ron Carter, Tony Williams) and his years with the Weather Report supergroup that he co-founded with the late Austrian genius Joe Zawinul in 1971, our hero formed the Wayne Shorter Quartet in 2000.

This group provides him with the freedom to reinvent and form his music always again. He sees the celebrated musicians Brian Blade, John Patitucci and Danilo Pérez less as sidemen but rather as equal elements of an organism. They call their method ‘Zero Gravity’, an original state of music which they always re-conjure in the interaction, and which is the basis of their explorative journeys into new musical territory. Lessons of music and life.

“The Language of the Unknown” accompanies the great saxophonist and his band with a concert on November 3, 2012, in the Salle Pleyel in Paris and observes the effect of the music on their creators, who are normally much too busy with creating the new rather than to deal with music already played. Surprising insights into the essence of their music open up, as well as the realization that true Creator-Spirit goes far beyond pure virtuosity. Blade updates Jack DeJohnette's subtleties, Patitucci alters moments of string pulse and great tenderness, and Perez's confirms the impressive evolution from his early days with Dizzy Gillespie to the complete maturity documented on his sublime collaboration with Claus Ogerman on the masterpiece "Across The Crystal Sea"; someting that reached a new plateau of creativity after he started to work with Shorter.

Besides the quartet members, only Wayne's best friend Herbie Hancock and Shorter's Brazilian wife, Carolina Shorter (with whom he married after the tragic death of his first wife Ana Maria Shorter) are interviewed. It's simply fantastic to see Wayne watching his performance on a laptop, reacting to (and commenting) the most significant moments of the concert. He listens carefully to "Lotus," "Prometheus Unbound," "She Moves Through The Fair," "Plaza Real" (on which the lyricism of his playing on the soprano sax reaches a divine dimension), "Starry Night" and "Joy Rider."

The titles of the film chapters reveal the philosophical aspects that Wayne is concerned to: "The lotus flower grows in a swamp," "The realm of potential," "Tragedy of life," "Flying all the time" (that's how he feels the quartet performing and how he felt during the Miles' years), "The unknown" (the most fascinating thing in life), "Jazz needs more color" (something that Miles also used to say), "Let's surprise each other," "You open the door and it's happening" (this chapter could also be titled "The power of surprise!"), and "Zero gravity." The documentary also shows Wayne & Carolina at home chanting the Nam Myōhō Renge Kyo mantra that is the central practice of all forms of Nichiren Buddhism. Haunting.
Posted by Arnaldo DeSouteiro at 10:32 PM