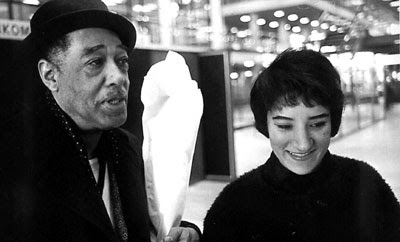 August, a terrible month. August 2013, an horrible month. George Duke, Cedar Walton, Marian McPartland and now we have lost the great and iconic vocalist Sathima Bea Benjamim. My late friend Dom Um Romao (also so much missed!) introduced me to her when he took part on the sessions for Sathima's "Dedications" album, back in January 1982 @ Blank Tapes (37 West 20th Street) in NYC.

The LP was produced by Sathima's husband, pianist Abdullah Ibrahim (aka Dollar Brand), a legend on his own right. But, curiously, Ibrahim didn't play on those sessions, that were recorded with Dom Um (percussion), Ben Riley (drums), Buster Williams (bass) and pianist Onaje Allan Gumbs, who also wrote all arrangements.

Fortunately, after several years out-of-print, "Dedications" was reissued on CD format in 2005 by the Japanese label Céleste (thx to the efforts of my friend Toshie Miyaki) including two bonus track recorded at Rudy Van Gelder's studio. A masterpiece, Rest in Peace, Sathima.
http://www.iol.co.za/tonight/music/jazz-world-mourns-sathima-bea-benjamin-1.1566444

.The death of Sathima Bea Benjamin has cast a shadow on the upcoming Standard Bank Joy of Jazz festival and over the rest of the jazz world.

The 76-year-old vocalist and composer died in Cape Town on Tuesday and was buried there on Wednesday.

The songstress was the wife of jazz legend Abdullah Ibrahim and the mother of musician Tsakwe Ibrahim and internationally renowned rapper Jean Grae.

Despite his great loss, Ibrahim will still be performing on the festival’s opening night.


Benjamin’s work was acknowledged earlier this month when she received a lifetime achievement award at the Standard Bank Jazz Honours.

“We gave Sathima Bea Benjamin a lifetime achievement award as a way of honouring her contribution to the heritage of music in this country. Her legacy will never be forgotten,” said the festival’s founder, Peter Tladi.“She made an enormous impact on the development of music in South Africa and internationally. Our thoughts are with her family and friends during this difficult time.”
Abigail Kubeka, who was also honoured this year, expressed her grief at the passing of Benjamin.

“I’m devastated. We were so happy together after not having seen each other for more than 25 years,” said Kubeka.“She was just saying to me, ‘To think that somebody still remembers me is an honour’. She really appreciated the award.”

Kubeka said she remembered Benjamin performing the song Somebody to Watch Over Me at the award ceremony. “It was so touching. It was like a hello and a goodbye.”

Benjamin’s career started at the age of 21 when she joined Arthur Klugman’s show, which toured South Africa. She subsequently released 10 albums, and was based in New York for almost 40 years.

She and Ibrahim were part of the anti-apartheid movement and they protested against inequality and racial discrimination. – Cadet News Agency
Posted by Arnaldo DeSouteiro at 10:34 AM

I am honored that I got to know,work and record with Sathima. Her efforts and her's alone were the reason the world knows of Abdullah Ibrahim when she brought Duke Ellington to a jazz club in Paris to hear her then boyfriend, Dollar Brand, now known as Abdullah Ibrahim. The rest , asthey say, is history. Rest In Paradise Sathima - Onaje Allan Gumbs