DVD of the Month - "A Tribute To Miles Davis" 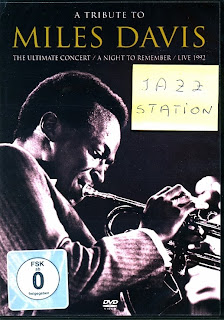 DVD of the Month
"A Tribute To Miles Davis" (XXL Media)

Videotaped live @ Lugano Jazz Festival for a TV broadcast, it documents the world tour that these giants did in 1992, after Miles Davis' death, to celebrate the artistry of the jazz genius with whom all they had played. The video quality may be poor, but the sound quality is OK and the musical performances in this open-air concert are superb.

The program includes several classics from the Miles Davis repertoire; two of them penned by Miles himself: "All Blues" and "So What." The other tunes are signed by Wayne Shorter ("Pinocchio," "Orbits" and "Paraphernalia," mispelled "Paraphanalia" on the credits), Herbie Hancock ("The Sorcerer", "Little One"), Ron Carter ("Eighty-One", "R.J.") and Tony Williams ("Pee Wee"), all of them originally recorded in the 1960s by the most famous Miles Davis Quintet -- with Hancock, Carter, Williams and Shorter -- on such albums as "Sorcerer," "E.S.P." and "Miles Smiles." [except "All Blues" and "So What" from the 1959 landmark album "Kind of Blue" that was cut with Bill Evans, Paul Chambers, Jimmy Cobb, Cannonnall Adderley & John Coltrane). 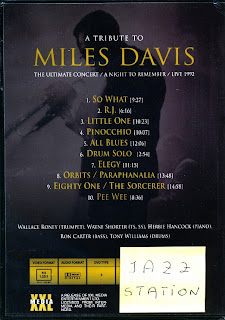 Posted by Arnaldo DeSouteiro at 11:42 PM