Elected one of the Top 5 vocalists of the year in the 34th Annual Jazz Station Poll, when her "I Love" album also appeared among the best vocal jazz releases of 2012, Cristina Morrison will be doing a rare NY gig tonight, August 30th, at the East Village club Nublu, located @ 62 Avenue C (between 4/5th street.) She will be backed by Misha Piatigorsky (the great pianist who recorded the "Never Let Me Go" CD with Mark Murphy), Edward Perez (bass) & Willard Dyson (drums).

This is music inspired by the cross winds, crashing waves and birdsongs of Galapagos where Cristina resides part of the year in her waterfront home-and idyllic spot in Isabela Island, her previous home for 6 years before moving to America.

The result is an exotically honest sound that strikes pure chords which then lackadaisically mellow out. Akin to the high and low energies of a stroll along a beach in Galapagos or to the dawn or dusk sounds of nature. Never has a jazz artist been able to draw inspiration from the raw nature of Galapagos and inject it with such ease and gusto into her ballads. 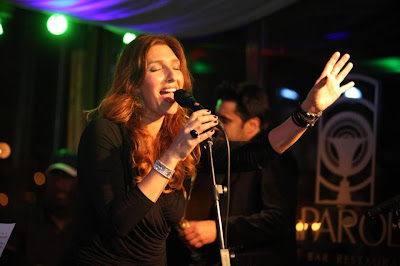 Cristina Morrison was born in Miami, Florida. She's a multi- cultural woman not only because of her background that is a mix between Latin America and the United States but also from her "gypsy" life experiences. She has lived in Quito, Miami, Rome, Los Angeles, the Galapagos Islands and currently, New York City.

Cristina's first love was the piano and then she soon grew up to discover performing arts were her passion. Her acting debut onstage was at the age of sixteen and started singing in cover bands, as well. Cristina, for many years, lived between Miami and Quito and after finishing high school moved with her mother to Rome where she attended drama school at "La Scaletta".

Here she learned fluent Italian and had her first encounter with playwrights like Tennessee Williams, Arthur Miller, Anton Chekhov and fell in love with the theatre. Meanwhile, she also started listening to jazz: to musicians like Chick Corea, Keith Jarrett and standard tunes, that her father listened to from the American Song Book.

In the early 90's she auditioned and was accepted into the prestigious American Academy of Dramatic Arts, she moved to Los Angeles and graduated a few years later. Since then Morrison has worked mainly as a lead actress in many television films and series based on Ecuadorian literature, she has opened a performing arts theatre that ran until 2003, has played characters of written works by Beckett, Brecht, Fassbinder, Shepard and Bashevis Singer among others. She has also worked as an assistant director for TV and written articles on entertainment.

Musically, Cristina was the lead vocalist of her jazz-blues band called "The Baroness and her Lovers". Her latest work in New York is the recording at Bennett Studios of her first original jazz solo album titled, "I Love". Here she showcases her talent as a singer-songwriter and is accompanied by some great jazz musicians. 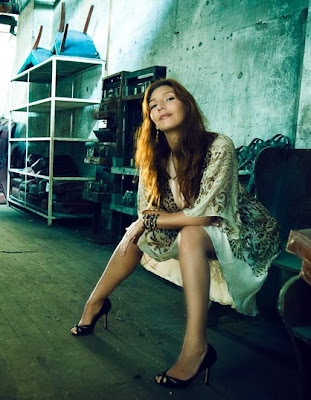 Currently, in repertoire, she's portraying five different women roles throughout three generations in the staging of "The Aging of the Plum" written by the Argentine Aristides Vargas. The play has been invited to various theatre festivals to countries like Mexico and Brazil among others to be announced. Cristina also holds under her sleeve a future film production project based on a journalistic chronicle which she bought the rights for.

The press has defined Morrison as an analytical, charismatic, creative, and a free spirited woman and as a chameleonic and versatile actress who works her characters at depth being able to reach her audience. As a singer, she's equally impressive. Check it out!

Posted by Arnaldo DeSouteiro at 12:03 AM