After a sucessful appearance today on "Good Day LA," Gina Saputo has a show tomorrow night, August 30th, at Steamers Jazz in Fullerton, CA.
http://www.reverbnation.com/c./poni/224430141
One of our favorite vocalists in the contemporary jazz scene, LA-based young diva Gina Saputo likes to sing in Portuguese, scatting and phrasing in a very creative way, sometimes sounds like the missing link between Carmen, Basia (check his own groovy "Explain," on which she also emulates Billie), Flora and Tierney. Tonight, she will be backed by Matt Politano (piano), Blake White (bass) & Ramon Banda (drums), with special guest Larry Salzman on percussion. Not to be missed.

Saputo usually writes the setlist by hand about an hour before the show, but it will probably include such songs as "I’ve never been in love before," "Cheek to cheek," "Call me," "Until I met you," "Fool on the hill," "They can’t take that away from me," "Bye bye blackbird," "Chega de saudade," "My man’s blues," "Exactly like you" and "'Round midnight." She promises more surprises too. 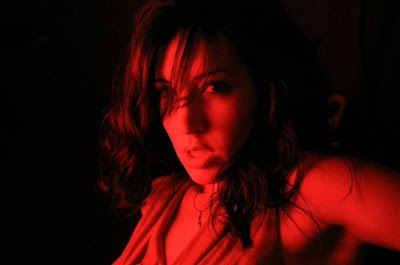 Gina Saputo is a vocalist, entertainer, clinician and arranger who has already established herself as one of the rising young stars on the scene. From there, Gina attended USC’s prestigious Thornton School of Music. Gina was among seven musicians chosen by Herbie Hancock, Terence Blanchard, and Wayne Shorter to study at the Thelonius Monk Institute. During her time with the institute, she performed for the State Department in Washington, D.C., and toured Vietnam with Hancock, Shorter and Nnenna Freelon.

Her first CD, “Gina Saputo,” which featured pianist Gerald Clayton, was recorded with vocal sessions produced by Grammy award nominated vocalist Tierney Sutton, who said, “Gina has the talent as well as the passion to stretch and think outside the box.” After two successful tours of Japan, her CD has climbed to #3 on the prestigious Swing Journal charts, and has received rave reviews. She performed (at the Once In A Blue Moon club in Seoul) and taught (as a guest professor at Gwangju University) in South Korea, toured Japan a second time with Grammy nominated pianist Bill Cunliffe, performed in Oregon with pianist Benny Green, at Club Nokia at LA Live, and at the Skywards Dubai International Jazz Festival. Gina sings regularly at Steamers Jazz Club (10 years!), The Hip Kitty, Ambrosia and First & Hope Supper Club.

Posted by Arnaldo DeSouteiro at 11:26 PM