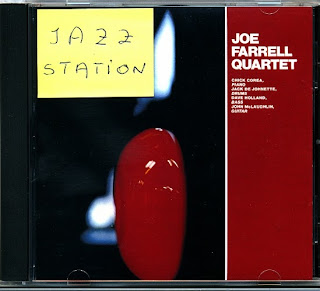 Prior to this new domestic edition, that came out last week, Farrell's debut solo album for CTI had been reissued on digital format in the U.S. only once, in April 1987, as part of the first batch of CTI CDs released by CBS that Spring. It remained in-print for only three months and soon was deleted from the catalogue. I was working in NY at that time, and everyday I used to go to the Tower Records store @ 66th & Brodaway Avenue (a true Disneyland for jazz & classical music lovers) and check which of those CTI titles were among the best selling CDs. In one particular week, nothing less than 7 CTI titles were in the list of Top 10 jazz albums!

Now, 25 years later, "Joe Farrell Quartet" reappers thanks to the smart folks of Wounded Bird, the label that licensed it from Sony Music, the giant company which controls most of the CTI catalog here in the USA.

[Unfortunately, Sony seems to have no interested on Farrell's impressive body of work. Joe recorded six albums as a leader for CTI, plus a session he co-led with George Benson, "Benson & Farrell," and the live dates with the CTI All Stars; "Outback" is the only one currently available directly from Sony, reissued in 2011 in a series that celebrated CTI's 40th Anniversary. "Moon Germs" came out on CD in 1987 (USA) and 2002 (Europe), but it's now out-of-print. On the contrary, Wounded Bird loves Farrell. Besides having reissued, in 2011, three of his funkyfied CTI albums -- "Penny Arcade," "Upon This Rock" and "Canned Funk" -- they also released his two dates for Warner, "Night Dancing" and "La Catedral Y El Toro," back in 2009.]

"Joe Farrell Quartet" is a very special album, indeed. It doesn't fits with the aesthetics of the typical "CTI sound." There's no lush strings, no funky laidback grooves, no backbeats, no jazzy interpretations of pop tunes. It doesn't fits with the "jazz-rock" scene of the early 1970s either, when that kind of sound wasn't called "fusion" yet. Nothing recalls the blackness electricity of Miles Davis' seminal "Bitches Brew," for example.

Farrell's CTI debut proved to be a very dense & adventurous effort, an almost completely acoustic session, except for John McLaughlin's electric guitar in two tracks: the opening etheral ballad "Follow Your Heart" (composed by John himself and recorded by him that same year, some months earlier, as an acoustic gutar solo piece on his "My Goals Beyond" LP), and the closing theme, Chick Corea's "Motion," both featuring Farrell on tenor sax.

In these two tracks, the Quartet becomes a Quintet. However, John's only solo takes place on "Follow Your Heart," displaying his unhortodox phrasing. (He would record once again for CTI only in two other occasions: the first "Fuse One" album in 1980 and, most recently, in 2009, when he, Jamie Cullum and the late George Duke sat in with the CTI All Stars on the "Live at Montreux 2009" DVD/Blu-ray.)

But don't think that Farrell's work on the other tracks floats in a straight-ahead mood in some kind of tried & tested mainstream formula. Actually, there's a sense of urgency & intensity that places the album closer to the avant-garde experimentation. Tracks like Corea's torrid "Motion" (similar to the moods developed by the pianist on his collaborations with altoist Anthony Braxton during the Circle days), Farrell's own "Collage for Polly" (on which the leader overdubs on soprano, oboe and flute, applying delays in all of them), "Alter Ego" (a bass flute/acoustic bass duet) and the vigorous "Circle in the Square" (with Farrell taking the solo spot on the soprano sax a la Coltrane) follow that direction.

"Molten Glass" surprises the listener as a pretty melody played by Farrell on flute over a quasi-bossa buyoant beat offered by DeJohnette. Corea's introspective ballad "Song of the Wind" is another highlight, played as a duet by the composer on the piano and Farrell first on oboe, then using the flute for the improvisation, and returning to oboe for the main theme's reprise. And what a gorgeous sound he achieves on both instruments!

Some curious infos: the album was released in Germany as "Super Session" (with a different cover), and received in Japan the additional title of "Collage" printed in the OBIs (although retaining the original artwork of the first American release). Some years later, when reissuing the album in the USA in 1976, CTI's big boss Creed Taylor changed its title for "Song of the Wind," and created a new album design.

One more detail: "Joe Farrell Quartet" was the last artwork that Sam Antupit, who was working with Creed Taylor since the CTI/A&M days, did for the label. Elton Robinson signed the artwork for CTI's next release, Stanley Turrentine's "Sugar," but soon Bob Ciano would do Freddie Hubbard's "Straight Life" and become the new art director for the label, pushing the innovative visual concepts of Taylor and photographer Pete Turner to a new level.

We only regret two things on this Wounded Bird release. First: there's no credit to the composers! Second: as usual with all WB reissues, the mastering sounds dull. Actually, it seems that they do a simple analog-to-digital conversion, with no interest to improve the sound quality through the use of new technologies. When an album had already been released on CD, like happened with "Joe Farrell Quartet," maybe they simply reproduce the sound of the previous digital issue. It explains why we never find credits to "reissue producer" and "remastering engineer" in any of the Wounded Bird CDs. Too bad for a company that deserves so much recognition for doing the great service of rescuing many gems neglected by their original labels. 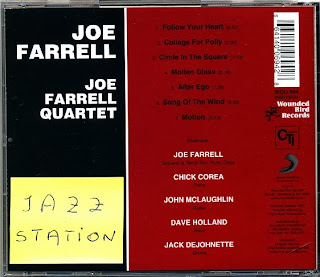 Posted by Arnaldo DeSouteiro at 11:52 PM