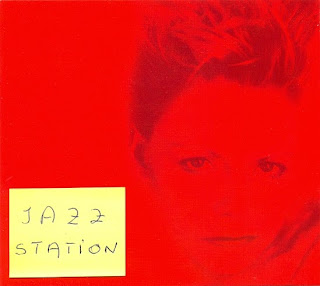 The California-based Polish vocalist Beata Pater is a dynamo of creativity, audacity and musical intelligence. I had already listened to some tracks of "Red" on her website, after having watched an ad on DownBeat, but listening to the "real disc" is the ultimate experience. I'm really in love with "Red", the kind of music that moves me, and possesses that kind of energy that attracted me to jazz via fusion in my childhood. Many artists try to perform "electric jazz" but without punch, without electricity. Beata's "Red" is superbly electrifying, full of high-speed energy.

Actually, it's not accurate to call Beata simply a singer or a vocalist. She's a top-class musician that uses her voice as a potent instrument (btw, she also plays violin in most of the tracks), belonging to that special class of artists such as Urszula Dudziak, Al Jarreau and Bobby McFerrin. But she's her own woman, gifted with vast resources, a sharp attack and an incredible stamina, sometimes creating the effect of a vocal choir through multiple overdubs.

It's not coincidence, however, that the main affinity we can easily note is with her kinswoman Dudziak, who emerged in Poland in the late 60s through a series of memorable projects with Mickal Urbaniak, and later became a fusion star here in the USA after releasing her debut solo album on Clive Davis' Arista label in 1976, which included the worldwide hit "Papaya" (in my native Brazil it became very popular as the opening theme of a TV soap opera, "Anjo Mau," but that's another story.)

The renditions of "Butterfly" and "Red Clay" (two of my favorite tunes ever, written by two of my all-time favorite artists, with whom I had the blessing to work with, ie., Herbie Hancock and Freddie Hubbard) would be enough to make me Beata's #1 fan. But there are also her stunning originals, very appealing and interesting as well, most of them co-penned with keyboardist Mark Little, who also wrote two tracks alone (the striking "Lady Carmen," with Beata also on violin, and the etheral "Praise," built upon muted trumpet, acoustic bass and tabla). And Marek Balata contributes the bossa-oriented "Bachnova," anchored on the acoustic guitar of the California-based Brazilian multi-instrumentalist Celia Malheiros, and featuring Darius Babazadeh on flute.

"Butterfly," the opening song, has received many versions (some good, some excellent) since its debut on Herbie Hancock's 1974 album "Thrust." But none of them with the frenetic up-tempo mood that Beata and her groovehunters confer to such a magical song. The intoxicating bassline provided by Aaron Germain evokes memories of Deodato's classic "Skyscrapers," while Mark Little's hands fly on the keyboard.

The infallible drummer Ranzel Merritt (certainly a Dennis Chambers fan) and the impeccable guitarists Andre Bush & Carl Lockett (fans of John Tropea and David Amaro will have much to savour throughout the album), also help to bring the track to an ecstatic frenzy. It's followed by the Pater/Little collaboration on the latin-tinged "Ahmar," a massive 21st century descarga propelled by Raul Ramirez's timbales and percussion arsenal.

Track after track, Darius Babazadeh stands as an important figure on the album, since Beata often doubles her voice with his powerful tenor sax on such tunes as "Red" and "Sir Doug of Edwards," an impassionate tribute to Berkeley’s Pacifica radio station KPFA’s jazz programmer -- or jazz activist, as he sometimes referred to himself -- The Doug of Edwards, who died in 2010 and whose voice was sampled. [Earland Edwards was his legal name, but he was called Doug by most.] Darius is also featured, alongside guitarist Carl Lockett and pianist Mark Little, on the funkyfied "Bis," on which Beata displays the blackness of her mighty voice.

The spectacular rendition of the title track from Freddie Hubbard's "Red Clay" incorporates an unexpected latin groove, tempered by an equally surprising change of tempo. My dear friend Mark Murphy and the now-defunct Rare Silk group recorded memorable versions of "Red Clay" with lyrics, but Beata's reading takes Hubbard's modern jazz classic to a whole new dimension. The quiet storm "Tragic Beauty" (one of the most successful examples of the voice/violin interaction) and the flamboyant "Vermelho" ("Red" on Portuguese) complete the tracklist.

Beata is a brilliant stylist that deserves respect and admiration for having the nerve to compose, perform and release such a highly personal, joyful & exhilarating musical statement, specially in a time that jazz becomes more boring each day, with so many old-fashioned tributes and very predictable performances. America deserves to know her better. 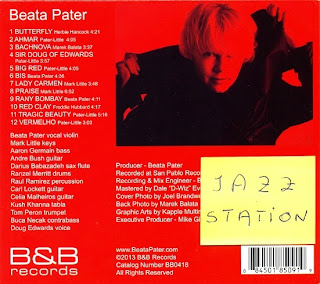 Posted by Arnaldo DeSouteiro at 11:35 PM