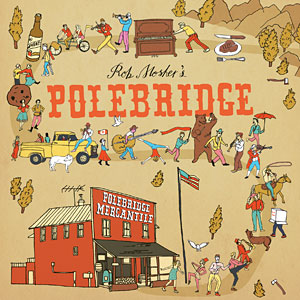 When composer Rob Mosher rounded the bend into Polebridge, Montana and caught sight of the old saloon piano sitting derelict behind the local mercantile, his imagination soared. So much so that he sprinted straight over to the out-of-tune upright and began penning the piece that opens his lush new chamber-jazz album, Polebridge.

The town of Polebridge, curiously like the piano itself, has a population of 88. Life hearkens back to the rough-hewn charm of pioneering days in the early 1900s. Locals live off the land, make their own culture and keep things simple. On a deeply quiet night in this frontier town, you just might find yourself hearing things; and if you happen to be gifted young composer Rob Mosher, that could sound like the music Schumann and Prokofiev might play were you to find them, drunk as can be, side-by-side on the bench of a saloon piano in the wild west.

Though Polebridge is clearly chamber music, there are occasional forays including an Appalachian fiddle tune, an otherworldly Klezmer number, a healthy dose of country swagger and plenty of improvisation throughout. Stellar musicianship and first-rate compositions make this charming release a surprising and satisfying listen.

So come visit Polebridge; stay a while.
**********
A melodic, lyrical composer and performer, Rob Mosher is a musician well versed in the jazz and classical worlds, committed to furthering the growth and combination of the two. Specializing on soprano sax, English horn and oboe, Mosher is a proven creator with a uniqueness of voice and an interest in exploring genre fluidity. Recipient of a 2009 ASCAP Young Composer Award, Rob recently released his critically lauded debut CD Storytime – The Tortoise which has been called “heartbreakingly beautiful, with melodies that stop the listener in [their] tracks” by the Hartford Courant (2008).

As a composer and bandleader, Rob’s ensembles further demonstrate a blending and furthering of jazz and classical music, including his 10-piece ensemble “Storytime” and a jazz quartet.

Canadian born and raised, Rob graduated with a music degree from the University of Toronto and participated in the Banff International Workshop in Jazz and Creative Music. Shortly thereafter, he relocated to New York City since 2004 where he is active as a leader and sideman. Venues and events recently played with his own ensembles in NYC include the Brooklyn Lyceum, Jazz Vespers @ St. Peter’s Church, Make Music New York, Spike Hill, T.B.D.’s, Anna Maria Kellen Auditorium, Third Street Music School Settlement, and the Renee Weiler Concert Hall.

Mosher’s other musical projects include: the Rob Mosher String Quartet, a classical ensemble with soprano sax replacing 2nd violin and Soprano/Soprano, a classical duo with soprano sax and soprano operatic voice. Mosher has also appeared as a freelance oboist and performed and recorded often as a jazz sideman. He was a member of the 40 Fingers Saxophone Quartet from 2001-2004.