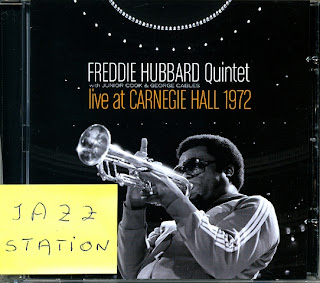 Freddie Hubbard at the height of his powers, at the peak of his popularity, at the heyday of his heyday. Can u imagine it? Well, now you can hear it on this precious CD, documenting his astonishing Carnegie Hall debut on July 4, 1972 as part of the 19th Annual Newport Jazz Festival.

He did 2 extraordinary shows that day; one in the afternoon, the other at night. Paul & Linda McCartney's "Uncle Albert/Admiral Halsey" (covered by Hubbard as track #2 from the Grammy-winning "First Light" album, recorded in September 1971 for CTI) opened the early show, but it's not included here.

The CD starts with Newport's founder and legendary impresario George Wein presenting Hubbard, who introduces the band members and plays the title track from "First Light," his third CTI album that exploded in sales and in the airwaves. Hubbard himself says "As u know, it's not Miles Davis, you are listening to Freddie Hubbard," because Miles was the one scheduled to perform at Carnegie that night but had to cancel at the last moment due to a illness. Hubbard agreed to replace him and received one of the biggest ovations in the history of the Festival.

The fiery band consisted of George Cables on, surprisingly, acoustic piano (although only Fender Rhodes had been used in all of Hubbard's last 3 albums at that time - "Red Clay," "Straight Life" and "First Light"), Alex Blake on acoustic bass, Lenny White (who had recorded on "Red Clay") on drums, and Junior Cook on tenor sax. Sometimes, during a tenor solo, Hubbard plays tambourine; other times, Cook does the same when FH is soloing.

The 20-minute long version of "First Light" is extraordinary, including an astonishing solo by virtuoso bassist Alex Blake, who remains one of the best kept secrets of the jazz scene, despite a long career as sidemen with such acts as Airto, Stan Getz and The Manhattan Transfer. Blake's solo on "First Light" was a tour-de-force performance that brought the audience to his feet. Hubbard's trumpet solo was pure dynamite too, propelled by the massive attack of Lenny White a la Tony Williams, Hubbard's trumpet solo was pure dyamite, starting with a high-note flurry and developed in a typically audacious mood, marked by signature smears and awesome bursts into the highest possible registers. No one could match Hubbard's technique and intensity in the 70s.

A voluptuous 8-minute rendition of "People Make The World Go Round" (the hit that r&b masters Thom Bell/Linda Creed composed for The Stylistics in 1971) followed, with Hubbard on flugelhorn, multiple break beats, and another enthusiastic response of the audience.

Hubbard's annoucement is very curious when he performs it once again, but with a completely different approach, in the second show: "We are gonna play something from my most recent album that will be released next week. It's a tune by The Stylistics and it's called People Make The World Go Round."

Such statement confirms that the sessions he had done with Bob James in April 1972 were supposed to be released as a full album. However, CTI's producer Creed Taylor gave up to release that album, and conceived another project with Don Sebesky that would become "Sky Dive," recorded on October 4 & 5, 1972. Three years later, when Hubbard had already left CTI to sign a millionaire contract with Columbia, Creed released the "Polar AC" LP, which included two tracks from those mysterious sessions with Bob James: "People..." and another Thom Bell/Linda Creed hit penned for The Stylistics, "Betcha By Golly, Wow." The other songs from that James/Hubbard partnership remain unreleased.

Equally interesting is the fact that Freddie Hubbard would record "People Make The World Go Round" once again, on December 13, 1972, for Milt Jackson's "Sunflower" LP, with an all-star rhythm section: Herbie Hancock, Ron Carter, Billy Cobham. "People..." also appeared in many of the concerts that Hubbard performed with the CTI All Stars during the Summer of '72, as documented on the album "CTI Summer Jazz At The Hollywood Bowl," recorded on July 30, 1972.

The second "set" at Carnegie Hall ends with a then-fresh Hubbard composition that he announces as "Back To Georgia." It would be recorded that next October for the "Sky Dive" album and received a new title, "Povo," after Airto Moreira's speech on the intro. "When we were recording, Airto started to improvise some words in Portuguese and told me he was sending a message to his people," Hubbard once told me. "I asked: how do you say 'people' in Brazil? That's why I decided to call the song 'Povo'!"

This live version of "Povo" that now sees the light of the day is beyond words, with the now famous funky bassline (played on the studio version by Ron Carter), great solos by tenorist Junior Cook and bassist Alex Blake, plus a special trumpet/drums conversation that leaves the audience breathless and literally screaming for "more."

The CD includes two bonus track from Hubbard's appearance at the Newport Jazz Fest (not in NY, but in Rhode Island) on July 3, 1969. Junior Cook was already on the quintet, which also included pianist Harold Mabern (who played with Wes Montgomery and, most recently, Eric Alexander), bassist Wayne Dockery (a future member of George Benson's band) and drummer Louis Hayes (a McCoy Tyner favorite who also recorded "The Hub of Hubbard" for MPS). They are heard on the reflective "Eclipse" and the hard-pop "Hub-Tones," the title tune of FH's 1962 album for Blue Note. This "new" CD is an essential item for all Hubbard's fans. 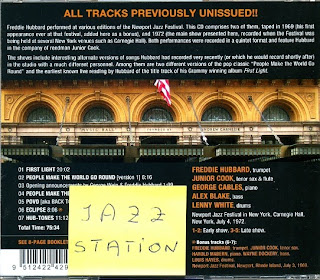 Posted by Arnaldo DeSouteiro at 11:57 PM