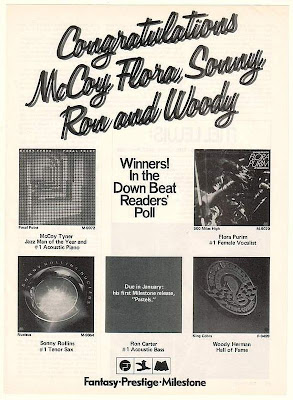 Advertisement published, by Fantasy Records, in the December 1976 issue of DownBeat magazine when Flora Purim won, for the third consecutive year, the DownBeat Readers Poll as Best Female Jazz Vocalist (she would place #1 for more 2 years, in 1977 and 1978).
Other artists from the Fantasy-Prestige-Milestone family of labels were featured in the ad: Woody Herman (who entered the Hall of Fame), McCoy Tyner (Jazz Man of the Year and # 1 Acoustic Piano), Sonny Rollins (#1 Tenor Sax) and Ron Carter (#1 Acoustic Bass).
Posted by Arnaldo DeSouteiro at 5:21 AM