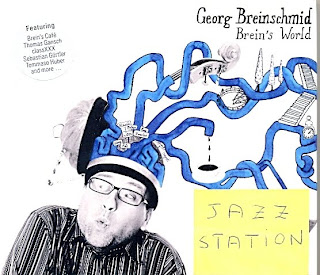 A joyful, soulful and adventurous 2-CD set by virtuoso Austrian bassist-composer Georg Breinschmid, featuring Brein’s Café, Thomas Gansch, classXXX, Sebastian Gürtler, Tommaso Huber, Daniel Pezzotti, Thomas Dobler, Robert Bachner, Erni M. et al.
From the opening track, "7/8 Landler," reuniting the bassist with Roman Janoska on violin and Frantisek Janoska on acoustic piano, you know you're in for a treat. The highly pleasant musical trip is conducted by Georg's gorgeously fat bass tone, using different formats, styles and musical colors.
The great artwork by Lili Schagerl & Julia Wesely, in a deluxe package with 2 separate booklets for each disc, perfectly translates Georg's musical inventiviness. A very humorous one, indeed.
ps 1: "Quartier Latin," featuring Daniel Schnyder on soprano sax, is a must!
ps 2: the dream-like adaptation of Liszt's "Liebestraum," "Bach 11/16" (an unbelievable arrangement for bass & violin of Bach's "Partita in E Major" in 11/16 meter), the hip-hop groove of "Tschukkn Belle" featuring vocalist Erni M on a viennese rap, "Without Mood" with its introspective mood, the jazzy "Dark Lights" a la "All Blues," the frenetic "Dream # 71," the beautiful "Petite Valse" (with an arco bass intro) and the flugel/bass duo on "Intermezzo" are other highlights.
*********
And the bass keeps humming. Georg Breinschmid, aka ‘Schorsch’ (for English native speakers with an eye for details, the correct pronounciation for this slang-infused nickname would be ‘Shoursh’), aka Gorg Brein (some people simply call him ‘Wunderwuzzi’, which could roughly be translated as a kind, belittling version of, well, ‘wunderkind’) – he returns with his double-pack of uncategorizable music for the world. It’s A Brein’s Brein’s Brein’s World, with its little and great concert waltzes, unsquare meters, Soul-Jazz, an artistic bridge towards the Alpine Folk tradition, Polka, Rap, Blues and lots of grooves throughout the entire album.

The bass player and singer tells his stories about staying here and moving on. At one point he plays Liszt (‘Liebestraum’), at another point he takes a stab at Johann Strauss (‘Radetzkymarsch’) or at Bach played in 11/16 meter and pretty much everywhere else he takes a stab at playing himself.

Diversity is his trademark, but it is not only his fantastically played bass that makes him unique; his carefully written, yet bizarre lyrics are equally important. Georg Breinschmid’s introverted side comes to life in his instrumental pieces as they sparkle with extraordinary nuances and a great love for details. His humorous side shines through most - but not all - of his songs and lyrics. These songs show him as someone who embraces life wholeheartedly and distills his thoughts and observations into meaningful and well-crafted satires.

His Viennese groove on ‘Tschukkn Belle’ (with Erni M. – voc, kazoo) is linguistically conspicuous and a rhetorical extravaganza as well as a phonetic chain of associations, leading up to Breinschmid’s realization that he has yet to be added to the ‘Encyclopedia of Jazz’. Originally, he was a classical contrabass player with the ‘Niederoesterreichisches Tonkuenstlerorchester’ as well as the Vienna Philharmonic Orchestra. But he turned his back on classical music and has been devoting all his energy to Jazz and its related musical styles ever since. He was the double bass player for the Vienna Art Orchestra for seven years and performed with artists like Archie Shepp, Charlie Mariano, Kenny Drew jr., Bireli Lagrene, Christian Muthspiel and many more.

But that is not all there is. Breinschmid’s excellent compositional abilities conjure a quite sustainable effect. His global understanding of music blends easily with local codes. In other words, his musical pieces live from their high tolerance for complexity and diversity. Based on their existing differences, they find their common and uniting traits. And he likes to fool us a little bit, because his compositions – which he sometimes calls “petite” – are Davids with the stature of Goliaths.

His latest double album mainly features performances by Brein’s Café, his main project with the Janoska brothers from Bratislava. There is of course a vast variety of guest performances from illustrious musicians (as on his previous album ‘Wien bleibt Krk’). One of these guests is his old friend Thomas Gansch on trumpet. The popular duo plays on six album tracks together. They get a trumpet tree growing, breathe new life into the ‘Radetzkymarsch’, they speed up the blues in 5/4 meter, provide a few surprises with a bass riff during the ‘Intermezzo’, lend a musical
improvisation to a photoshoot (‘Window Serenade’) and immortalize the ‘Schnucki von Heanois’ (‘Sweetie from Hernals’) with a truly crazy rap. Is it the next party hit or the next chart breaker? Life is always looking for the next hit. But let us carry on with the guest list. One could call the Swiss-Austrian ensemble, which includes Daniel Schnyder (ss), Thomas Dobler (vib), Daniel Pezzotti (vlc) as a ‘class of its own’ – if they would not already have a name that already calls them what they are.

The bass player revisits his very first composition with classXXX, while he dreams the ‘Dream#71’ with Manu Delago (hang) and Andi Tausch (guit) and takes a ‘Urlaub am Giatl’ (‘Holiday on the ‘Giatl’’) - another exquisite Viennese song - with Azzi Finder (vl) and Roland Bentz (vl). With ‘Oldtime Hit’, accompanied by a sextet including Clemens Salesny (sax), Horst-Michael Schaffer (trp), Robert Bachner (trb), Clemens Wenger (p) and Christian Salfellner (dr) – he pays tribute to good old Soul Jazz. Then there are six tracks where he is joined by Sebastian Gürtler (vl) and Tommaso Huber (acc). Their first and foremost collaboration is ‘Flugzeugderorist’ which is based on an experience with airport security involving a plastic water bottle.

This playground provides us with the finishing touches for beauty, the somber atmosphere for perfection and the lust for life for a perfect day. All of this is packed into ‘7/8 Landler’, ‘Musette #2’, ‘Liebestraum’, ‘Brein`s Knights’ a.o. He sings about his social life on web (‘Computer-Wienerlied’) and he lets us know when one has to stop (‘Ma muass aufhean wanns am scheenstn is’). And at one time Breinschmid sits alone in Croatia in ‘Room 422’ and whistles a song to himself. In short: No Breinschmid, no deal.

To order the CD, please visit:
www.preiserrecords.at
www.amazon.de
*************
Georg Breinschmid was born in 1973 and lives in Vienna. He is one of the leading Austrian jazz musicians on the international scene. Breinschmid studied classical bass at Vienna University. As a student he worked as a substitute in the big Viennese orchestras, and also played chamber music with orchestras such as the Amadeus–Ensemble, Ensemble Kontrapunkte and Die Reihe. At the same time he started out as a jazz musician, cooperating for instance with the violinist Zipflo Weinrich.

From 1994 to 1996 he performed with the Lower Austrian Tonkuenstler Orchestra and from 1996 to 1998 he was a member of the Vienna Philharmonic Orchestra. Quite soon he decided to turn his back on a career as a classical orchestra musician and to dedicate himself fully to jazz. In 1999 he became a freelance jazz musician, excelling as one of the most versatile and virtuoso bass players on the international jazz scene.

Since 2005 Georg Breinschmid has increasingly made his mark as a composer. His compositions are also performed by other groups, such as Ensemble Amarcord Wien, the duo „Bach &Bosnisch“, or the ensemble Bass Instinct. His devotion to Vienna and Viennese songs is clearly recognizable in his CD project “Wien bleibt Krk” (2008). His 2002 production “Mauve” won him(together with Arkady Shilkloper and the expatriate Vienna-based Brazilian guitarist Alegre Correa) the Hans Koller Prize as CD of the year. The same contest the year after saw him become “newcomer of the year”.

In 2007 and 2009 Georg Breinschmid was nominated for the Hans Koller-Prize as "Musician of the year", in 2007 as the bassist of the Christian Muthspiel Trio also for the "CD of the year" (for "Against The Wind - The Music of Pirchner & Pepl"). The double DVD “Georg Breinschmid Live“ and the double CD set “Brein’s World“, which has garnered much critical acclaim in Europe and overseas, was released in 2010. In May 2010, Georg Breinschmid and his trio Brein’s Café performed at the opening of the Vienna Festival, which was seen live on television by millions of viewers all over Europe. He also appeared on the television shows “Annettes DaschSalon“ and the NDR literature matinee “Herbstblätter“, in which Breinschmid and violinist Daniel Hope treated audiences to a variety of original compositions.