CD of the Week - "John Goldman's Quadrangle: Outside The Box" 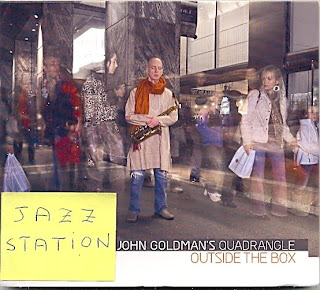 CD of the Week
John Goldman's Quadrangle: "Outside the Box" (JG Music) 2011

Jazz composer-musician John Goldman’s Quadrangle is pleased to announce the release of their new CD "Outside the Box." And we are pleased to listen to it. One of the most adventurous and intriguing jazz albums we've heard this year. All the musicians are excellent, but guitarist Scott Hesse stands out due to his marvelous solos and original phrasing, specially on the opening track, "Color Therapy," "Dr. Jeckyl & Mr. Hill" (without vocals, being also a vehicle for Goldman's creativity) and the frenetic "Hesse Steps," with its changing tempos and on which Hesse steals the show during his improvisation. But Goldman strikes back, shining when soloing in an avant-garde atmpsphere.

Leslie Buekleman does a delightful job throughout the album, contributing sensitive wordless (and "false fragiles") vocals to most of the tracks - she only sings lyrics on "Higher Faith," followed by the instrumental afro-cuban hard-bop "Harrison." Trombonist Kendal Moore is featured on "Moore is More," as well as on the latin-tinged "Soy Gonzo," with Goldman (on flute) and Beukelman (voice) doubling the melody (that could be easily credited to the late Brazilian maestro Moacir Santos) and even a stunning flute-vocal unison passage before Moore's solo, more reminiscent of Frank Rosolino than ever. All propelled by the solid & subtle combination of Patrick Mulcahy (bass) & Cory Healey (drums), plus Juan Pastor's congas. A rare case of an album complex & pleasant at the same time; never pretentious when complex, never selling out when pleasant. They enjoy good music. So do I.

"Outside The Box" features challenging compositions by John Goldman, except an inspired rendition of Thelonious Monk's "Monk's Mood". The CD may be purchased online through iTunes or CD Baby.
***********
The latest release from saxophonist/flutist John Goldman with the newest edition of his band Quadrangle, documents the continued development of one of the most creative artists on the scene today. The music of the Portland, Oregon native and longtime citizen of Chicago (where he migrated to at the behest of mentor Eddie Harris) reflects an eclectic amalgamation of sounds imbued with both the natural splendor of his native Northwest and the urban grit of his adopted windy city. Goldman himself describes Outside The Box as “something different” for him, an indication of a somewhat new direction in which Quadrangle has been headed with the induction of guitarist Scott Hesse into the band and the resultant change in the group’s sound from when the rhythm section was centered around various pianists.

The music on "Outside The Box" has earned high praise from Chicago’s esteemed Jazz Music Examiner Neil Tesser, who called the date “impressively varied and neatly balanced,” noting “a welcome gentleness – a spiritual optimism (in) Goldman's summery, uncluttered compositions” and lauding Quadrangle for constructing “a deceptively easy and delightfully relaxed set, full of strong writing and perfectly attuned playing,” singling out Goldman for his avoidance of “the fancy and flashy, preferring to use his clean, dark tone and evenly spaced phrasing to craft simple and correspondingly strong statements.” Going on, Tesser commended bassist Patrick Mulcahy and drummer Cory Healey, “whose finely textured rhythms power the band with admirable reserve” and extolled guitarist Scott Hesse for his “rock-solid comp chords;” and “fluid and glittering” solos.

Along with Hesse, the “new sound” of Quadrangle can be attributed to Goldman’s new frontline partners, trombonist Kendall Moore and vocalist Leslie Beukelman, whose contrasting sonances serve the leader’s expansive compositions so admirably. Heard to great effect on the opening “Color Therapy,” the singer, who Tesser notes, “as a “band voice” – wordlessly doubling a melody and adding depth to the horn lines … Beukelman brings a light, lithe lilt to the music, enhancing the spaciousness of Goldman’s writing.” The buoyant Brazilian tinged tune, reminiscent of Chick Corea’s Return To Forever with Flora Purim and Joe Farrell is a shining example of the dichotomy of Goldman’s composition style, simultaneously evincing a lightness and melancholy, as well as his playing, which moves from an airiness on the melody to a darker, more muscular tone on his solo.

“Moore Is More,” Goldman’s dedication to Kendall Moore, features the trombonist’s mellifluous “voice” in a most conducive environment. Opening with a slightly dissonant repetitive line, blending alto and trombone into a single soulful sound, the piece moves into an eastern tinged melody recalling early McCoy Tyner and Woody Shaw, where the brass man’s style, more focused on tone and lyricism than velocity and pyrotechnical command, shines along with Goldman’s alto, hearkening to the hip sound of Jackie McLean and Grachan Moncur III’s hip Blue Note days.

Goldman composed “Dr. Jeckyl and Mr. Hill” in honor of his former frontline partner, up and coming trumpeter Marquis Hill. The soulful modal line combines the relaxed funky feel of hard bop bands in the tradition of Art Blakey and the Jazz Messengers and the Jazz Crusaders with the rhythmic looseness of Coltrane’s quartet with Elvin Jones. Hesse’s relaxed comping contributes greatly to the relaxed mood of the song, allowing both Goldman and Moore to build their emotionally satisfying solos with thoughtful deliberation, while his solo shows him to be a solid improvisor with his own voice.

“Hesse Steps” was written by Goldman as a vehicle for guitarist Scott Hesse’s innovative harmonic concept of an augmented scale. The date’s freest piece, it has a sense of searing urgency (stoked by Mulcahy’s rhythmic bass and Healey’s driving drums) that is felt in both the leader’s and Hesse’s daring improvisations, without sacrificing the typically satisfying appeal of Goldman’s melodic lines, enhanced here by Beukelman’s sweetly ethereal soprano voice.

Goldman’s “Higher Faith,” the composer’s most recorded piece, is a modern gospel hymn, featuring Beukelman singing Goldman’s optimistic words that spell out a spirituality that informs all of his music. Soulful, with an earthy folkiness, it’s appeal reaches out beyond typical jazz and should find an audience with fans of Norah Jones and similarly mainstream artists.

Goldman wrote “Harrison” for a performance with AACM bassist Harrison Bankhead at Chicago’s storied Velvet Lounge. It opens with an African influenced feel (appropriate to the venue where it was first performed) enhanced by guest percussionist Juan Pastor and then moves back and forth into a straight ahead swinging jazz rhythm before taking off into a loosely structured mid-section that features “far out” playing by both Goldman and Moore, as well as, in the words of Tesser, “some mind-bending electronics from guitarist Hesse”.

“Monk’s Mood,” (originally titled by it’s iconoclastic composer “That’s The Way I Feel Now”) is given an appropriately spacious treatment by the alto-guitar-voice trio of Goldman, Hesse and Beukelman, the latter who proves quite effective singing both melody and harmony on the album’s most melancholy outing.

The disc concludes on an optimistic note with Goldman’s “Soy Gonzo.” A lighthearted Latin Jazz dance, its ironic title refers to the composer’s unsuitable sobriquet, the nickname with which he was dubbed as a youth that is completely contrary to his peaceful demeanor. Originally written year’s ago for a Chicago Jazz Festival performance with percussionist Reuben Alvarez’s band (opening for Miles Davis), all hands are on deck here for its debut recording with all of the soloists –Hesse, Moore, Beukelman and Goldman (impressive on flute here) - taking a turn on the happy finale to a most pleasing date.

Signally satisfying in its unifying of various sounds and moods "Outside The Box" represents a major step in the career of John Goldman – an important new step in his quest to develop a singular sound - one that is both personal and universal, groundbreaking yet appealing, both contemporary and timeless. It’s all there at once, the reflection of a creative spirit that refuses to be confined and continues to explore and grow in different directions.
************
John Goldman ~ Sax / Flute / Composer

Goldman began his professional career in his home town Portland, Oregon with some of the area's best musicians such as Tom Grant, David Friesen, and Jeff Lorber. Since moving to Chicago in 1988, John has added to his already eclectic influence from the West Coast. He has performed extensively with Brazilian musicians Paulinho Garcia, Chicago Samba, and Luciano Antonio, as well as Latin Jazz artists Ruben Alvarez, Silvia Sossa, and Tito Carrillo. He has performed with the Chicago Jazz Ensemble, and the Chicago Jazz Orchestra.

Over the past decade, Goldman has played many of Chicago's music venues, including the Chicago Jazz Festival, the Jazz Showcase, Orchestra Hall, Ravinia Festival, and Arie Crown Theater. He has played many music clubs around the city, such as the Green Mill, The Velvet Lounge, Joe's Bebop Cafe, Pete Miller's, Smoke Daddy, and many others. John's new group Quadrangle can be every Sunday night at Studio 914 in Chicago, as well as other jazz venues around Chicago.

John is respected for his talent as a composer. His debut CD release "For All the People" (2001) is an all original project and featuring some of Chicago's finest musicians such as Bobby Broom and Ron Perrillo. His CD "In Walked Pierre" (BluJazz 2005), was voted one of the top 20 jazz albums of 2005 by Chicago Public Radio WBEZ and is now available in stores nation wide. John's CD "Higher Faith" (jgmusic 2007) is a duet with John on sax and Pierre Walker on piano and vocals. His newest release, "Outside the Box" features more of Goldman's original compositions with members of his current working band Quadrangle. This project has received critical acclaim nationally and was named one of Chicago's top jazz CDs of 2010 by Chicago music critic Neil Tesser.
***********
Scott Hesse ~ Guitar

Hesse grew up in Sioux City, Iowa. At 16 he began performing in his father’s 12-piece big band throughout the Midwest. Scott attended Eastern Illinois University where he studied for three years with New Orleans piano legend Henry Butler. In 1994, Scott moved to New York City to attend Manhattan School of Music where he continued his music education with renowned guitarist/recording artist, Rodney Jones. Scott holds a BA in cultural studies from Empire State College in New York and a Master’s Degree in Jazz Composition from DePaul University in Chicago. In 2007 Scott began teaching at Eastern Illinois University where he heads the guitar program. He also teaches at Harold Washington College in Chicago and is a frequent guest clinician at Lane Tech High School in Chicago.

Originally from Sandwich, IL, Leslie Beukelman (vocals on "Outside The Box") started her musical endeavors at a young age, singing, playing piano, and playing trumpet. Currently located in the city of Chicago, Leslie is captivating listeners with her unique style and versatility. Involved in groups from free jazz (Carplet) to modern jazz (Greg Ward Sextet, Ian Torres Big Band), to standard jazz (Leslie Beukelman Trio, Chicago Skyliners Big Band) to a cappella (Stripped), to progressive rock (Information Superhighway), Leslie explores her fresh sound on her debut solo album, “Here I Am.” This album showcases Leslie’s voice on her lively dynamic arrangements of old and new standards, as well as her compositions. She is regular guest artist with John Goldman’s QUADRANGLE.
*********
Patrick Mulcahy ~ Bass

Mulcahy was born in Melbourn, Australia and plays many different styles of jazz. Playing in Chicago for 8 years, he has appeared almost every major venue in town including, Symphony Center, the Jazz Showcase, Green Mill, Taste of Chicago. Patrick toured Poland in 2009, and is a member of John Goldman’s QUADRANGLE.
************
Cory Healey ~ Drums

Healey is one of the Midwest’s most in demand young drummers. His unique talent and broad knowledge of many musical styles has allowed him to perform, record, and tour with numerous world-class musicians. Jazz icons Dr Lonnie Smith, John Abercrombie, David Amram, and Bob Florence have called upon his masterful drumming. As a member of Fareed Haque’s Flat Earth Ensemble, Healey preformed along side Hindustani heavyweights Kala Ramnath, Steve Gorn, Subrata Bhattacharya, Ganesh Kumar, Jim Feist, and Salar Nader.