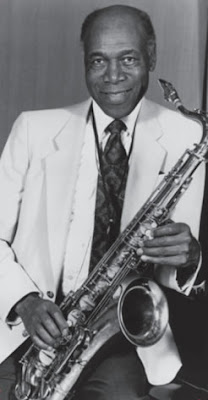 Buddy Collette, a jazz saxophonist, flutist, clarinetist and bandleader who blended his usually soothing, often pungent sounds with those of many jazz greats and who was a leader in the struggle to break racial barriers in the music industry, died on Sept. 19 in Los Angeles. He was 89.

The cause was a respiratory ailment, his daughter Cheryl Collette-White told The Los Angeles Times.

Although Mr. Collette never attained the fame of many jazz stars, he played beside them, from his days as a teenager in the 1930s until a stroke ended his career in 1998.

According to Ted Gioia's "History of Jazz" (Oxford University, 1997), one of Mr. Collette's closest colleagues, the bassist Charles Mingus, went so far "as to claim that his friend Buddy Collette could play as well as Bird" -- a reference to the nickname of the renowned saxophonist Charlie Parker.

He came to national attention in 1955 as a member of the drummer Chico Hamilton's quintet. But he had already made his mark, moving from small jazz groups to big bands and from film studio work to television.

In the estimation of The New Grove Dictionary of Jazz (Macmillan, 2002), Mr. Collette brought a "virile approach" to the saxophone. And, as a flutist, it said, "Collette's fluent playing helped shape a style of chamber jazz that utilized a soft instrumentation, but was nonetheless improvisational, swinging, and in its own way, hot."

William Marcel Collette was born on Aug. 6, 1921, in the Watts district of Los Angeles. His father, Willie, was, a pianist; his mother, Goldie Marie, was a singer. In addition to his daughter Cheryl, Mr. Collette is survived by two other daughters, Veda and Crystal; a son, Zan; eight grandchildren; and nine great-grandchildren.

As a child Mr. Collette went to a Louis Armstrong concert with his parents and soon turned from piano lessons to the saxophone -- and jazz. When he was 12, he formed his first band. Among the youngsters in the group was Mr. Mingus, whom Buddy convinced to switch from cello to bass.

After serving in the Navy in World War II, during which he led a dance band, Mr. Collette became a well-known name among the swing and be-bop players in the night spots dotting Central Avenue in Los Angeles. In 1949, he broke a color barrier by being chosen as the only African-American in the band for the Groucho Marx show "You Bet Your Life."

Along with the pianist Benny Carter and the arranger Marl Young, Mr. Collette became a leader in the struggle to eliminate segregation in the American Federation of Musicians. On April 1, 1953, the black and white locals of the union in Los Angeles merged.

"I knew that was something that had to be done," Mr. Collette told The Los Angeles Times in 2000. "I had been in the service, where our band was integrated. My high school had been fully integrated. I really didn't know anything about racism, but I knew it wasn't right. Musicians should be judged on how they play, not the color of their skin."
********
From his official website:
http://www.buddycollette.com/biography.html

When it comes to unsung jazz heroes, Buddy Collette's talents on tenor saxophone, flute, and clarinet are as close to unmatched as it gets. A gifted composer of classical music in addition to his jazz pedigree, Collette continues to fly almost defiantly under the radar of greater renown.

William Marcel Collette was born on August 6, 1921 in the Watts district of Los Angeles. Along with saxophonist Dexter Gordon bassist Charles Mingus, and drummer Chico Hamilton, he helped keep bebop alive in the city's historic Central Avenue neighborhood. Buddy also played an important role with the development of the cool jazz movement. After attending a concert by the legendary trumpeter Louis Armstrong with his parents, a young Collette was taken by the idea of a career in jazz. Satchmo's achievements and lifestyle presented an appealing alternative to the menial and often degrading jobs open to African Americans during the Depression.

In 1933, at the age of 12, Collette formed his first jazz ensemble. The group contained, of all people, a talented teenager named Charles Mingus, who Buddy convinced to switch from cello to bass. Mingus was already an extraordinary talent, but his infamous temper was also firmly in place. In the years that followed, Collette was instrumental in helping Mingus forge better relationships with various musicians and producers. Buddy's gentle, friendly demeanor was the perfect counterpoint to the ornery bassist; they became lifelong friends.

Remembering the action on and off Central Avenue, Collette speaks fondly of the lengthy jam sessions from that district during the 1930s and '40s. During those years the area around Central Avenue was filled with the sounds of swing, and, after World War II, bebop. Collette enlisted in the military during World War II. When he returned to Los Angles, he quickly became one of the city's first bebop players.

In 1949, Collette recorded "It's April" in the backroom studios of Dolphin's of Hollywood. Although "It's April" and other tunes recorded at Dolpin's were receiving radio airplay and selling well, studio owner John Dolphin seldom paid the musicians. This money conflict eventually led to the stabbing and killing of Dolphin by one of his musicians. Buddy left Dolphin behind and overcame tough racial barriers in the industry by becoming the first African American to perform in a television studio band, appearing on Groucho Marx's television show, You Bet Your Life.

Fortunately, Collette was not content on being the only black musician in the television studio orchestra. He eventually became a political and cultural activist in the battle against segregation in the music industry, and the burgeoning influence of McCarthyism. He also helped organize a concert and rally protesting government repression of the legendary African American singer, actor, and political activist Paul Robeson. Collette's artistic and social activism continued when he led a grassroots campaign to desegregate the Los Angeles musician's union. Gerald Wilson, Frank Sinatra, Nat "King" Cole, and saxophonist Benny Carter were some of Collette's early supporters.

None of these activities got in the way of Collette's music making. In 1955, he became a founding member of drummer Chico Hamilton's legendary quintet. The unusual quintet also featured pianist and cellist Fred Katz, whom Collette calls "the first jazz cello player." A year later, Collette recorded Man of Many Parts, his first album as a bandleader. The album not only demonstrated Collette's mastery on saxophone but also his compositional talents.

In the late 1950s, the careers of Collette and his West Coast contemporaries were taking off. But while most of them like Mingus, Hamilton and saxophonists Eric Dolphy and Charles Lloyd moved to New York for more lucrative gigs, Collette stayed in Los Angeles. Although Collette didn't become a household name like his friends, he did become a noteworthy educator in the 1960s. His students included such wonderful woodwind players as James Newton, Frank Morgan, Sonny Criss, Eric Dolphy, and Charles Lloyd.

In 1996, the Library of Congress commissioned Collette to write and perform a special big band concert to highlight his long career. For the concert Buddy brought together some of his old musical mates from Los Angeles including Jackie Kelson, Britt Woodman, and Chico Hamilton.

Today, Collette is receiving more recognition than ever. Although he no longer performs due to a stroke in 1998, the gleaming beauty, immense talent, and gentle spirit of Collette remain intact and highly influential.
Posted by Arnaldo DeSouteiro at 8:34 AM