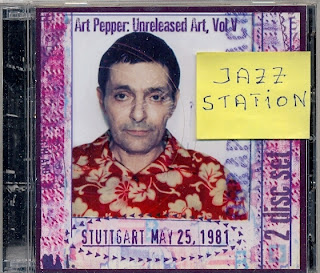 2-CD Set Features Art's "Comeback Band": Milcho Leviev, Bob Magnusson, Carl Burnett. 130 minutes of first-class jazz! Recorded live "somewhere" (nobody recalls the name of the venue, not even Art's widow, Laurie Pepper, who toured with him, nor the fans who sent her the tapes!) in Stuttgart, Germany, on May 25, 1981. Repaired & remastered by audio wiz Wayne Peet @ Newzone Studio. A great job, since the tracks came from three different sources, and the audio quality varies a lot. But what matters is the superior musical quality of all the performances contained herein.
Highlights: the album opener, "True Blues", featuring Bob Magnusson's fat & warm bass sound in a perfect solo; a bossa-tinged version of "Yours Is My Heart Alone,"(“Dein ist mein ganzes Herz”), originally written in 1929 by the Hungarian classical composer Franz Lehar for “The Land of Smiles” (“Das Land des Lächelns”), one of a series of operettas he wrote for renowned tenor Richard Tauber, and a "song" which later became popularized by Frank Sinatra -- and the Bulgarian pianist Milcho Leviev performs a stunning solo; a non-mellow (yes, it's possible) version of "Over The Rainbow"; a tender ballad written for Pepper's daughter, "Patricia"; his clarinet tour-de-force on "Avalon"; a 24-minute funky jam titled "Make a List, Make a Wish," once again with Leviev almost stealing the show; and, of course, "Cherokee."
**********
Thanks to the generosity of obsessive jazz collectors worldwide -- and their sub rosa recordings -- Laurie Pepper is able to bring Art Pepper's luminous and funky improvisations of one night in Stuttgart to the rest of the world nearly 30 years later.

By the time they got to Stuttgart, this band had been touring and playing together nearly nonstop for more than two years. Their communication with each other within the evolution of this music was magical and always surprising. Each hearing reveals new, entertaining, and inspiring subtleties in their musical responses to each other: They listened. That, Art always said, was the key to great jazz.

There are no "new" songs here, but everything, of course, is brand-new and unique to this night. Each of these songs offered Art new worlds, nightly, to explore and conquer. He was determined to fill these final years with the music he hadn't made during the years he'd lost to addiction, imprisonment, and depression.
"True Blues" was an Art original, a usual opener, which starts off breezy but gets hotter and hotter. "Yours Is My Heart Alone" is a medium-tempo waltz Art discovered through Clare Fischer when he went to Japan with Cal Tjader in the '70s. "Landscape" is all Art, pure thrills, named for the view from a bullet train. "Patricia" is Art's tenderest ballad, written for his daughter. "For Freddie" (i.e., Hubbard) is pure, solid, swinging bebop. "Straight Life" is one of Art's earliest tunes and his fastest, and on this night it's played at warp speed. On sweet "Avalon," Art plays his clarinet. "Make a List, Make a Wish" is soulful and erotic. Ever since Art played "Somewhere Over the Rainbow" with Shorty Rogers back in 1951, it's been his song, a hymn to longing. And finally, the concert ends with "Cherokee," "a battle cry, the tune, Art said, to test your chops," Laurie writes in the haunting liner notes. 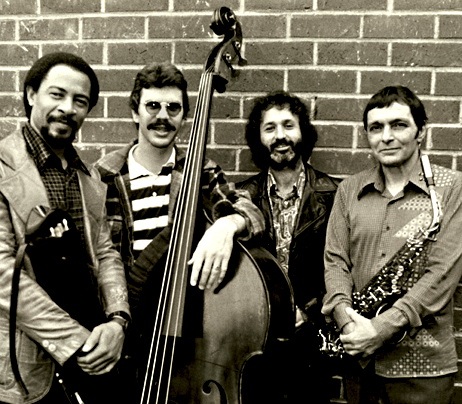 Since founding Widow's Taste in 2006, Laurie Pepper has released an album every year. The label is based on her musical and aesthetic "taste," and she said she hoped that by manufacturing and selling records she might finally get her "taste" of monies pirates were seemingly accumulating from sales of bootlegs. In fact, she wasn't quite that optimistic. She hoped she might break even. The operation, however, has become self-financing because nowadays the record business, coupled with modern technology, can be a satisfying side business for tiny, independent labels -- even when they purvey jazz.

The Internet is the royal road to a niche audience, and the traffic goes both ways. After the second album was released, Laurie was contacted by a European fan/collector who, once he was sure she wouldn't start screaming at him, told her what he had. And he told her she could have it. The result was the dazzling Volume III.

Now, the same benefactor has come up with the Stuttgart concert. Here, again, Wayne Peet of Newzone Studio remasters, preserves, and polishes the beautiful live sound of this superlative band. At this point, Laurie says, she can't quit. "The fans want more, and there is more. And that would make Art happy. The critics seem to really like everything so far. And finding the photos and memos and contracts, designing the covers and booklets, and telling the stories that the music came from, and even shipping the albums, is just too much fun."

"What separates the great from the merely good is being willing and able to deal with your emotions in public more than demonstrating your musicality and practicing a lot. To never play the same thing twice requires taking risks. Pepper plays the saxophone as though he has nothing left to lose, he already has come back from losing everything. He is betting the bank, his heart is on his sleeve, his fingers are moving on their own, his will is overpowering." --Mike Zwerin, www.mikezwerin.com
This new release is available at Amazon.com and at CDBaby.com.
Web Site: http://www.straightlife.info/ 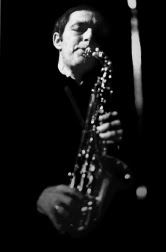 Posted by Arnaldo DeSouteiro at 4:02 PM