CTI All Stars: "California Concert" to be reissued as a 2-CD set with five bonus tracks

For five consecutive years, the CTI All-Stars spent two weeks at the beginning of the summer touring the West Coast, from San Diego to Seattle. "To see each one of them individually would have been a treat; to see them together was magic," Didier Deutsch once wrote.

When the first CD issue of "California Concert" was released in the USA by CBS back in 1987, reissue producer Didier Deutsch deleted "Leaving West" in order to present a single CD, later including that track on the compilation "The Best of Stanley Turrentine," released in 1990.

However, at the time of the first Japanese CD reissue, produced by Yoichi Nakao for King Records in 1996, "California Concert" appeared as a 2-CD set in a lovely mini-LP gatefold sleeve, including all five tracks from the original album and reproducing Leonard Feather's liner notes, on which the late jazz historian defined the event as "spectacularly successful."

Feather's text, actually a review he had written for Melody Maker, listed the other tracks performed that night, but not included in the original album. So, thousands of CTI fans around the globe spent years dreaming with the chance to listen to those numbers.

While working in the reissue of another CTI album, I found out that the master tapes of "California Concert" had been preserved and were at hand at the CBS (now Sony) archives, and mentioned it to my friend Douglas Payne, who heads a fabulous website about CTI.

Two of those unreleased tracks eventually appeared on CD, thanks to Didier Deutsch. Freddie Hubbard's pretty flugelhorn performance of the jazz ballad "Here's That Rainy Day" was included in the compilation "The Best of Freddie Hubbard" (Epic, 1990). And Johnny Hammond's killer version of Carole King's "It's Too Late," featuring one of Billy Cobham's best solos ever, was added as a bonus track to the CD reissue of Hammond's "Breakout" (Sony, 2002).

Now, these 2 tracks plus 3 other tracks never before released anywhere in the world -- John Coltrane's "Impressions" (the opening song of the concert, and recorded by Turrentine on his "Sugar" LP), George Benson's take on Miles Davis' "So What?" (that he had cut in studio for his CTI solo debut, "Beyond The Blue Horizon") and Freddie Hubbard's explosive final number "Straight Life" (the title theme of his second CTI project) -- will be available for the first time ever in the most complete edition ever of "California Concert" scheduled for October 26 release by Sony Masterworks in the USA. Actually, only Hank Crawford's soulful performance of "Never Can Say Goodbye" is missing. Anyway, already one of the top releases for 2010! 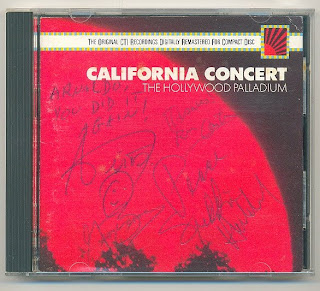